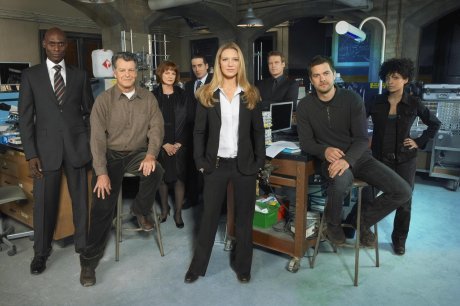 This year marks the one hundredth anniversary of the founding of the FBI and on their official website they list the Top Ten Myths in FBI History (http://www.fbi.gov/page2/july08/myths_072408.html). Number 10 is they don’t have Nikola Tesla’s papers (although they strongly hint that someone does) and Number 9 is they don’t maintain any “X-Files.” (Why were they called “X-Files,” anyway? Because the “U” (for “Unexplained”) file drawer was full, so they had to put them in the “XYZ” drawer.I mention this for two reasons: the lead character in Fringe (Tuesdays, 9 PM (EST) on Fox) is an FBI agent and this series seems to owe a lot to Chris Carter’s series. Its creators (J.J Abrams, Roberto Orci, and Alex Kurtzman), who also created Lost, seemed to have mixed elements of that show with a reversal of The X-Files, a touch of 1950s sci-fi movies and… CSI: Miami?Like Lost, there seems to be a giant, sinister corporation behind a series of unexplained occurrences, but unlike Files, where there were so many conspiracies they were hard to connect, we know up front it all stems from the bad guys’ experiments with “fringe science.” Instead of an FBI agent who believes “the truth is out there” and actively looks for it, we have agent who doesn’t want to know what’s really happening but is forced into the quest—and it’s a woman instead of a man. Instead of a boss who reluctantly tolerates her activities, we have one (Lance Reddick, of Lost and The Wire) who encourages them. And instead of a Cigarette Smoking Man (aka “The Cancer Man”), we have a Cancer Free Woman, the CEO of the evil corporation, who knows what’s going on and manipulates our heroes. (Another X-Question: Why didn’t they just kill Mulder and be done with it? Kill him and you make him a martyr, the CSM explained. Discredit him and he’s under your control.)Where do the 50s and CSI: Miami come in? In one of the neater twists, we have two Scullys, a father and son team of geniuses who, like every good fifties movie scientist, can whip up anything in their basement laboratory. And like Miami’s Horatio Caine, our heroine seems to have access to unlimited resources. (She can open a closed lab at Harvard, order a zillion dollars worth of state-of-the-art equipment (and a cow!) and participate in a risky experiment that wouldn’t even be sanctioned at Guantánamo Bay without any authorization from higher-ups!The production values are first-rate and the script was interesting but the cumulative weaknesses from the “source material” may prove too much for Fringe to overcome—that, and competition from a similar series on another network (CBS’ Eleventh Hour).