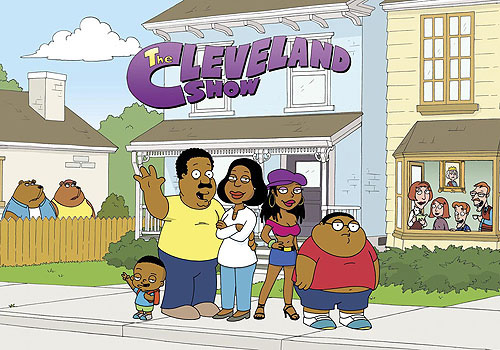 FOX has released the first photo for the upcoming Family Guy spinoff 'The Cleveland Show' which will come to FOX in Spring 2009. THE CLEVELAND SHOW (working title) (Sundays, 9:30-10:00 PM ET/PT): Many years ago, CLEVELAND BROWN (voiced by Mike Henry) was a high school student madly in love with a beautiful girl named DONNA. Much to his dismay, his love went unrequited, and Donna wound up marrying another man. Cleveland once told Donna he would always love her, and if this man ever done her wrong, he'd be there when she called. Well, this man done her wrong. Donna's husband skipped town with another woman, leaving Donna with a daughter and a baby. Now she's come to Cleveland and offered him another chance at love. Unattached after the Loretta-Quagmire debacle and true to his word, Cleveland joyously accepts and he and CLEVELAND JR. move to Stoolbend, VA, to join their new family. Once in Stoolbend, Cleveland has a few surprises in store for him, including a flirtatious new stepdaughter, a 5-year-old stepson who loves the ladies, as well as a collection of neighbors that includes a loudmouth redneck couple, a British family seemingly stuck in the Victorian era and a family of bears living at the end of the block. FAMILY GUY was only the beginning. Get ready for THE CLEVELAND SHOW (working title)! PRODUCTION COMPANY: 20th Century Fox Television EXECUTIVE PRODUCERS: Seth MacFarlane, Rich Appel, Mike Henry VOICE CAST: Mike Henry as Cleveland Brown