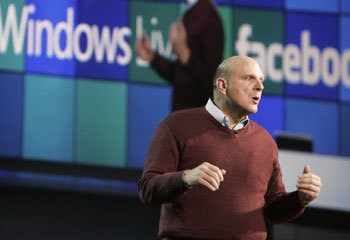 As was widely expected, at last night's CES keynote speech, Microsoft CEO Steve Ballmer gave Windows 7 the full dog and pony show, formally announcing the availability of the upcoming operating system as a public beta. Want to see what the fuss is all about? You can download it starting January 9 at www.microsoft.com/windows7 and give it a spin on your own PC. (You will have to burn the OS to a DVD in order to install it, so prepare accordingly.) Ballmer acquitted himself admirably in his first CES keynote (a job that's been diligently performed by Bill Gates every year for as long as anyone can remember), but aside from the beta news, there was little that was truly earth-shaking in the presentation, largely consisting of demos of previously seen features and a lot of talk of corporate partnerships and economic tough love. Ballmer also formally launched Windows Live Essentials, at last officially bringing it out of beta. Not much new here aside from its non-betaness. As well, Robbie Bach, president of Microsoft's entertainment and devices division, came out to discuss some largely well-known announcements, including the upcoming Halo games, plus more news about partnerships with hardware makers like Toshiba. You can watch the entire keynote (82 minutes) at the link in the first paragraph. http://tech.yahoo.com/blogs/null/114827