This thread is for movies, cartoons or comics featuring black leads that should be redone on a whole other level from what they were originally done! 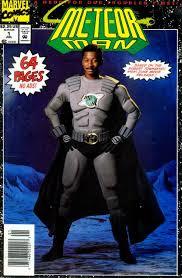 Meteor Man - This Robert Townsend movie has every thing a black super hero needs as far as origins, powers and villains but is mired down in more comedic moments than is necessary. An update could make it an epic film about a black man miraculously struck by a strange meteor that gives him uniques powers. Losing the comedy element affords it a chance to be taken serious as part of the black super hero movement agenda! Blankman - Damon Wayans plays an awkward tech geek that uses trash and other leftover appliances to make high end gadgets. In the movie he has a beautiful love interest played by Robin Givens while he dons a weak and cheaply made disguise. If this movie were more serious it could rival The Saint by having the lead character play an on the fly hero that could fashion just about any item for espionage usage quicker than you can say MacGyver. Instead we get a bumbling caricature who happens to be a genius playing towards dated black stereotypes! The Brown Hornet - This Bill Cosby inspired hero was naturally intended as a show within the show called Fat Albert. The name could be for an epic hero with equally epic adventures if updated to something to match the tech era we live in. Not just a rip off of the Green Hornet but something that matches Marvel and DC in value with a character that fly's with metallic wings equipped with battle armor. This of course requires believing in one's self as a world beating super hero that goes all in!