With the release of Iron Man (2008) we had the first post-credits scene in a Marvel movie, setting up the formation of the Avengers. The Avengers (2012) ended with our first glimpse of Thanos (leaving a lot of non-Marvel devotees wondering, “Who was that?”) and set in motion the events culminating in the movie ending Marvel’s Phase 1, Avengers: Endgame.

In Avengers: Infinity War, the spacefaring warlord Thanos had a grand idea to end suffering throughout the universe: simply eliminate half the beings in it. To facilitate this he needed to acquire the Infinity Stones, six immensely powerful objects tied to different aspects of the universe (time manipulation, enhancement of mental abilities, allowing the user to fulfill their wishes even if they contradict scientific laws and do things that would normally be impossible, and so on). The Avengers try to stop him and fail, Thanos snaps his fingers and half the living things in the universe crumble away.

As Endgame begins, the remaining Avengers come up with a simple plan, find Thanos, take back the Infinity Stones, return those Thanos disappeared. This operation does not go as planned (otherwise, this movie would have a runtime significantly shorter than three hours). The Avengers and the world are trying to adjust to this new reality when a chance to “set things right” comes from an unexpected source. They come up with another plan, one last chance to reset reality.

Avengers: Endgame lives up to its hype—and actually exceeds it. It is deserving of all the accolades heaped upon Infinity War that the earlier movie didn’t quite fulfill. Endgame is a caper movie, a redemption movie, and of course, an action/adventure superhero flick with a fair amount of comedy scattered throughout. But it also has quiet, reflective moments, which, while with not quite the gravitas of other Marvel movies, are more than you’d expect from people whose first fashion choice is brightly-colored spandex. 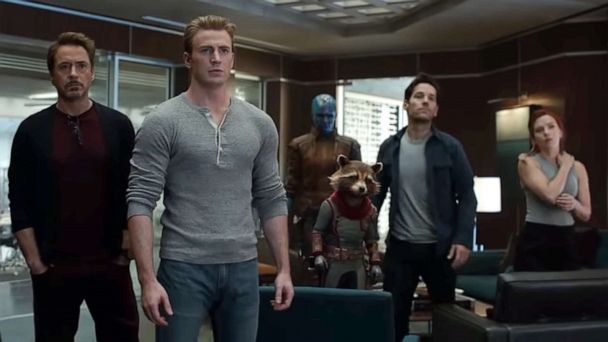 The screenplay, credited to only two writers, gives us a script that moves the (long) story quickly with a minimum of convenient coincidences and setbacks and not a lot of filler dialogue. The (made-up) science is just complicated enough to sound “real” but is not enough to sound too “unbelievable”—and there are winks at events appearing in the comics and the world outside the four-color universe.

So, what you really want to know is, is Endgame worth your time and disposable income, where does it rank in the Marvel Movie Pantheon, and is it better than that other Marvel movie. (You know which one, and if you don’t, may you be banished from Wakanda, forever.) Answer: Yes, among the top five, and no.

But Avengers: Endgame is a fitting conclusion to Marvel’s Phase 1. And for one-time only I will violate my own non-spoiler review rule in the name of the greater good. After THREE HOURS sitting in the dark, that bathroom break is going to start looking r-e-a-l-l-y good—but you can’t leave yet ‘cause you don’t wanna miss those scenes hidden in the middle of the credits (which seem to go on for as long as the movie). So here’s the spoiler: THIS MOVIE HAS NO SCENE IN THE CREDITS. Or after the credits.

So it’s safe to make a break for the Exit (after you pick up your snack debris).

But do stick around for the cast credits immediately following the fade out; they’re a nice send-off. And they don’t go on too long.