It’s not too much of a stretch to say that the root causes of the events in Captain America: Civil War are the same as the root cause of that other Civil War, servitude verses self-determination. The United Nations decides that despite saving the world from extradimensional alien invasions and genocidal AIs, the Avengers are loose canons who need to be battened down. So they have a choice: agree to become a sort of super-powered SWAT team working under UN authority or hang up their capes and tights. And if they continue to save with world on their own authority, they will be prosecuted as criminals. 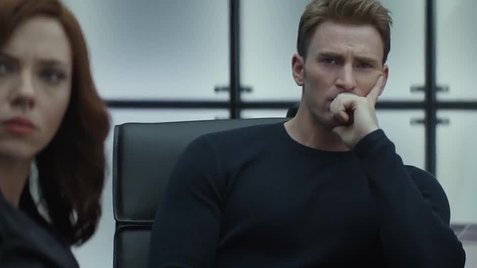 Some heroes, like Tony Stark/Iron Man think this is a good idea—if they can’t agree to this, they’re no better than the bad guys. But others, like Steve Rogers/Captain America, don’t trust heroism by committee. The lines are drawn but before anything else can happen, a UN facility is bombed and the culprit appears to be the international terrorist and assassin the Winter Soldier/Bucky Barnes, Steve/Cap’s childhood friend. The order is given, bring Bucky in dead or alive (but preferably dead). Steve can’t let that happen.

(And did we mention, the King of Wakanda, a super high-tech African nation, is killed in the UN attack and his son is out for revenge, that is, he wants to kill Bucky.)

The strengths and weaknesses of the MCU (that’s “Marvel Cinematic Universe,” for the uninitiated) is the constant cross-referencing. It gives you the feeling that whatever happens, it’s all happening to the same people in the same place. It creates a kind of shorthand so when somebody “new” shows up, you immediately know who they are and where they fit in. there is not a lot of need to explain 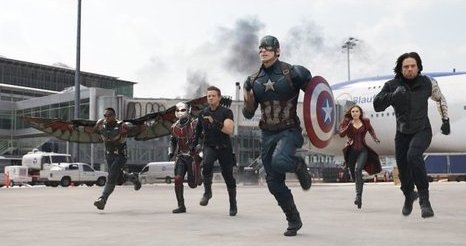 character motivations, and the quiet moments are lent an extra level of poignancy. (Like, is the Vision’s doting over the Scarlet Witch just doing a job, or is it… something more?) The bad news is it sometimes leads to, if not “sloppy” storytelling, then story development that occasionally strains your willingness to suspend disbelief. (Like, while someone is about to break into the good guys’ ultra secure facility, you’re asking yourself Why didn’t they plan on preventing something like this?)

Captain America: Civil War is a pretty nearly perfect superhero action blockbuster. It reminds you that these movies can be “serious” without losing their sense of fun. The action sequences are fast and furious and the CGI is not overly invasive. But there are some leaps of logic that will have that WTF? thought bubble forming over your head. But these are relatively minor quibbles. Civil War isn’t The Dark Knight (Really, what movie ever could be?) and, despite its many plusses, it’s not really in the same ballpark. But it is easily the best superhero movie since Deadpool (so far this year, anyway) and that’s a pretty good place to be.