It constantly amazes me how many entertainment offerings touted as being NEW! ORIGINAL! GROUNDBREAKING!  or some other superlative… aren’t. Take a show about a group of 22nd century people, refugees from an environmentally distressed Earth, who settle in a distant land to make a new start. That show was Earth 2, which ran for one season on NBC (1994-95).

This time out the show is the much-anticipated (and oft-postponed) Terra Nova (Fox, 8 pm ET Mondays). It’s the 22nd century (2149) and Earth is environmentally distressed, the result of “war, greed and stupidity.” The only hope for the survival of the human race is to establish a colony 85 million years in the past, when dinosaurs roamed the Earth.

Jim Shannon is a Chicago police officer who winds up in prison after being caught violating the law: in a world where “A Family Is Four!” he and his wife have three children. His wife and two of their children are chosen to participate in the Terra Nova project; after escaping jail he and the third child join them. 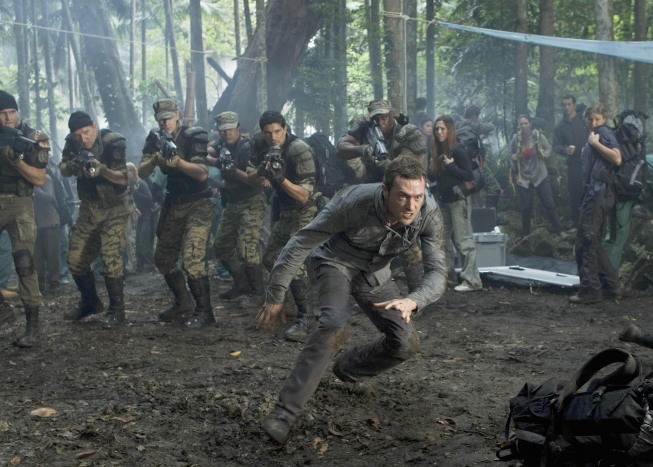 The trip to the Late Cretaceous is a one-way affair, so rather than lock Jim back up (since the settlement’s director has no use for rules that haven’t been invented yet) he joins the colony’s security team. And just in time, for all is not as it seems in paradise: there is a dissident faction, known as the Sixers (because most of them seemed to belong to the Sixth Pilgrimage, our story begins with the Tenth). The Sixers are rebelling because they want—

Well, we’re not sure just what they want, not yet. Or what the settlement director is hiding from the other colonists. Or what the mysterious markings left by his son (who he believes may be dead) really mean. Or…

Like Earth 2 (and before that, Lost in Space, where the Robinson Family was going to set up a colony because Earth was environmentally distressed...), Terra Nova is basically the story of a family struggling to survive in a strange, new world, except this time they’re contending with dinosaurs instead of Terrians—or talking carrots. (There was an episode of Lost in Space with a giant carrot!) There’s also a bit of Falling Skies in the mix, with the look of the series is sort of high-tech Gilligan’s Island, Lost with vegetable markets and Jurassic Park in reverse. (Instead of the dinosaurs being locked in, it’s the people this time around.)

There is room for all sorts of paradox things, think Ray Bradbury’s story A Sound of Thunder, where stepping on a butterfly back in the day changes things down the line. But we don’t know if Terra Nova is going to break new ground or just take us back to terra familiar.