Until Empire came along, Gotham (Mondays, 8 PM ET, Fox) was the runaway hit of the new television season (although I would have given that honor to The Flash, pun intended). Gotham attempts to tell something that has yet to be told: not just how the Batman came to be but why. And just to make it interesting, without Batman.

Gotham opens with the 10-year-old Bruce Wayne witnessing the murder of his parents in a mugging gone terribly wrong.  (Not a spoiler, this happened 76 years ago!)  Det. Jim Gordon vows to find whoever did this. (Gordon seems to be the only morally uncompromised officer in the Gotham City Police Department, where a “good” cop is one who doesn't shoot you after extorting you.)

As it approaches its first season finale (it’s already been renewed for a second season), Gotham still has to work out some of its problems (like having a character shot in the previous week’s episode and no mention of this event at all the following week). It plays on what we already know about the Batman Mythos while taking great liberties with it, not always successfully. Did anyone know that the future Riddler was once an evidence technician with the GCPD? Or that the Penguin started out as a mob lackey—and a dangerously homicidal one at that? Or that the future Catwoman and Poison Ivy were homeless street kids? (Or that Selena gave Bruce his first non-familial kiss?) Names are dropped constantly (Crispus Allen, Renee Montoya), we meet the future Robin’s parents, Harvey Dent makes an appearance… 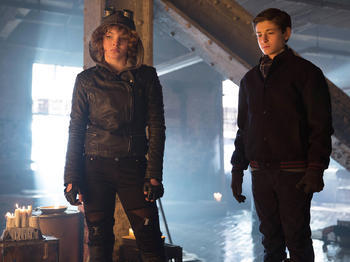 …And that’s one of Gotham’s major problems, building “suspense” when we already know how all this is going to turn out. We know that none of the people are going to die. (Well, Crispus, maybe). We know what every one them is going to be when they grow up. They rub elbows with Gordon so frequently you wonder why he doesn’t don the cape and cowl. (Or how he doesn’t know who the Batman is the first time he appears.)

There are some things I definitely do not want to see happen on Gotham. Since it’s hinted the crime that killed his parents might have been a hit all along, I don’t want to find that Thomas Wayne was a respected doctor by day and a masked vigilante by night. And I do not want to see a Robin-aged Batman leaping from rooftops, bashing criminals. Gotham has been beautiful to look at, easy to like but a little harder to love. Like Gordon’s and Bruce’s hopes for Gotham City, it’s got good people. They just need someone to show them the way.