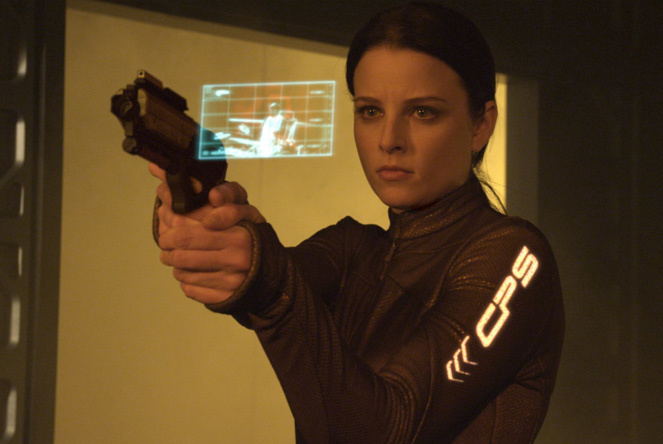 The “trackdown show” has been a television staple since, well, Trackdown in the late 1950s, when intrepid Texas Ranger Hoby Gilman searched for bad guys in the southwest. Change “Texas ranger” to “bounty hunter” and you get the spin-off show, Wanted: Dead or Alive. Change “bounty hunter” to “niece and her cousin” tracking down cursed antiques and you get Friday the 13th (The Series) change the cousins to FBI agents and “antiques” to “artifacts” and you get Warehouse 13. Change “FBI agents” to “shady government operatives” and “artifacts” to “missing prisoners” and you get last year’s Alcatraz. (Did we ever find out what was going on there?) and change “shady government operatives” to “protector” and “missing prisoners” to “ruthless criminals from the future” and you have SyFy’s new series Continuum (Mondays, 8pm ET.)

In 2057, private corporations bail out cash-strapped world governments and ultimately abolish them, taking over the world. After two decades of “corporatocracy,” a dissident group, “Liberate,” emerges to overthrow the new status quo. They stage an attack on the Corporate Congress, killing all twenty of them with 30 thousand other people as “collateral damage.” Eight of the group are caught, tried, and sentenced to death as an “example,” their execution to be broadcast live worldwide. (So we see the future of home entertainment….) but on the day of the execution Something Happens and the “Liber8”and two of the corporate police officers guarding them… disappear—

—and rematerialize 65 years in the past. When one of the police officers, Kiera Cameron, tries to get in touch wither superiors, her signal is intercepted by a teenager, Alec Sadler, who is Beta testing the information system he developed, the same system that is the basis for Kiera’s specialized body armor, sort of a cross between the next generation of the stuff they were using in Minority Report and Batman’s 1960s utility belt. (It can stop bullets, repair itself, has camouflage capability, can hack into an ATM…) Kiera just wants to get back to her family in 2077, but she is told by one of the Eight that the trip to the past was one-way. But Alec says maybe not, maybe she’s there now because she’s supposed to be, that everything is playing out the way it’s supposed to be. Of course, the Liber8 have different plans, if they can’t start their war in 2077, they’ll do it now, in the past. And Kiera decides on a new course of action: get back to the future and stop Liber8.

Continuum looks good, moves fast and is pretty smart (so far). So as not to confuse the science challenges technobable is kept to a minimum, unless you consider “implant” and time travel” baffling terms. But it will be interesting to see if they can keep that “almost caught ‘em, they narrowly escaped” format fresh in the long run pr if it'll just become another police procedural, just like all the others, only "different.".