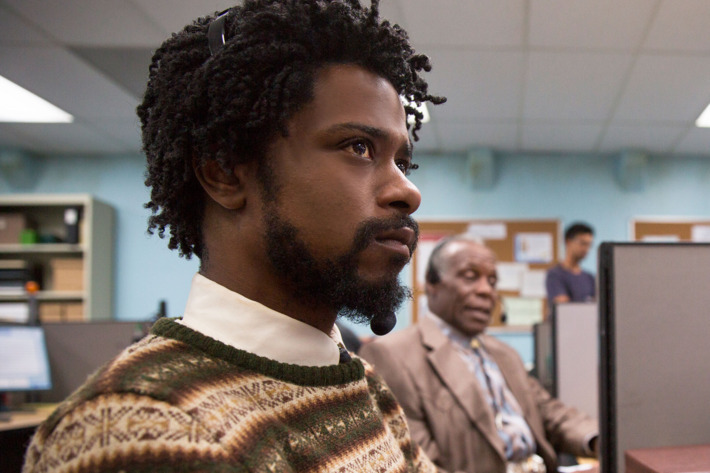 It’s difficult to quickly describe Sorry to Bother You, starting with the title: is it a nod to a telemarketer’s lame excuse for trying to sell you something you neither want or need, or is it the filmmakers ironically talking to the audience, trying to jar them from their complacency? It’s definitely science fiction but it’s also social satire—or is it social commentary? Perhaps the best shorthand description would be, if there was a crossover episode between Atlanta and Black Mirror, this might be it.

Our hero, Cassius Green, is so down-and-out he’s accepting charity from people who could use some charity themselves. He gets a job at what has to be the sleaziest telemarketing company on the planet and he’s no good at it—until a colleague suggests he’ll get better results if he uses his “white voice.” (I suppose it should be mentioned the story takes place in the part of Oakland that borders The Twilight Zone.) The “white voice” isn’t the one your average black comedian uses when playing a white character; it’s not the way white people sound but the way (even) they want to feel. 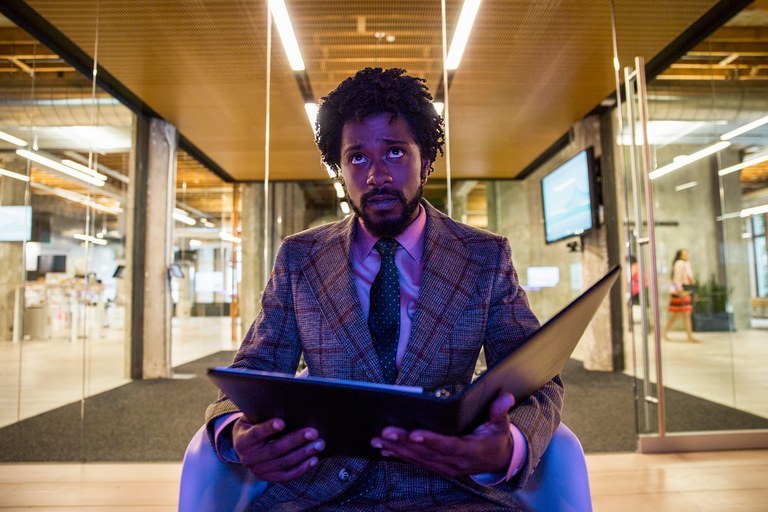 Cassius tries it, finds he is a “natural” and is so successful he quickly becomes a “power caller,” one of the elite telemarketers who make calls to corporate leaders instead of Joe and Jane Average. He’s invited to a party so exclusive even “Bey and Jay” can’t get an invite and he meets the owner of the telemarketing company—and a global work farm that critics say is just a form of legalized slavery. He offers Cassius an offer he can’t refuse, an obscene amount of money to become the “inside man” in his ultimate plan for world domination—or higher profits, in any case.

Like other movies with major did-not-see-that-coming plot twists (The Crying Game, The Usual Suspects) you cannot talk about what happens next in Sorry to Bother You. You have to see it for yourself—and even then, you may not believe it. But for the parts we can talk about:

Sorry to Bother You sometimes preaches to the choir, some of this stuff you already know, even if you’ve never been able to articulate it. The storytelling is subtle, posing questions it never answers—just like in real life. (We know Cassius is devoted to his father (at least we think that’s who’s in the picture he always carries) but there is never any mention of his mother. And how come the guy who tells him about the “white voice trick” never used it advance his own career?) It’s a mediation on everything from living for posterity verses living for the moment to the nature of blackness (and who decides what “authenticity” is)—and can you be a success without being a sell‑out?

Sorry to Bother You poses the most thought‑provoking philosophical questions (for black people, anyway) since Black Panther: It’s funny (never unintentionally) and profound, challenging in the good way and really mind-blowing. You might be sorry if you don’t bother to see this one.