In The Rough Guide to Sci-Fi Movies, John Scalzi lists three characteristics a work must have in order to be considered science fiction. I had to turn the book in before I wrote them down (And what do we learn here, boys and girls? (1) Do not procrastinate and (2) support your local public library. And independent bookstores!) but I do remember two of them: the premise of your story has to be based on science, not fantasy (so the aerosolized neurotoxin your character uses cannot be distilled from unicorn tears) and the science has to be either an extrapolation of real science (SETI researchers discover an extraterrestrial signal) or based on a well-thought-out but nonexistent science (…and it tells them how to build a wormhole transport device). And that brings us to Intelligence (Mondays, CBS, 10 PM ET).

To combat cyber threats to America, the United States Cyber Command is tasked to create the computer equivalent of the Manhattan Project. Instead of trying to make a computer think more like a person, they decide to make a person think more like a computer. And two billion dollars later they develop a microchip that does just that—but it won’t work on just anybody, only someone who has a certain genetic marker (kind of like you can channel the Force if you have enough midichlorians in your blood). They do find just such a person, Gabriel Vaughn, who also happens to be a super-Delta Force guy (sometimes you just luck out). Among the things he can do with the chip is hack into any computer network in the world, open electronic locks and upload viruses and other information apparently by just thinking about it. He can also use all the information in his head to create three-dimensional dioramas he can walk around in (kinda like that detective in Unforgettable). Together with Riley Neal, the Secret Service agent hand-picked by the President to protect him, they go around the world defending Truth, Justice and the American Way—or furthering American geopolitical interests, take your pick. 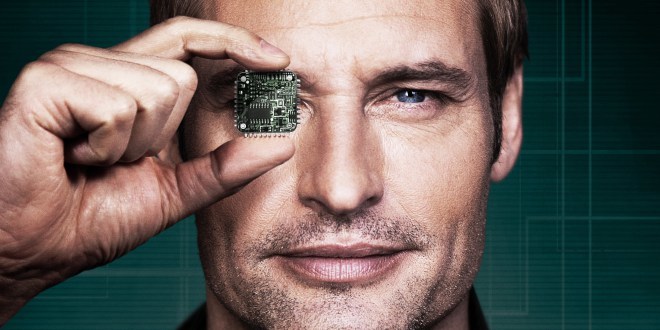 Intelligence is the spiritual heir to The Six Million Dollar Man (who, adjusted for inflation, would cost around $30M today—and they never explained how any of his “modifications” worked either). The show is well-written, but by people whose only AP courses were apparently in the arts, not the sciences. (Anybody who’s actually used their laptop in their lap can tell you: those things generate heat. Now imagine a more powerful chipset than the one running your Asus in your head.)

William Gibson, who is credited with coining the term “cyberspace,” wrote an essay for Time answering the question, would we ever put computer chips in people’s heads. He said yes, but not for very long. A more likely scenario, he said, would be to take someone’s brain cells, culture them as a sort of neuron-based integrated circuit, then implant them back in the person’s head. Now that’s a science fiction premise, and that was back in 2000. Intelligence moves fast and is nice to look at but in the end, it’s just a “smarter” version of NCIS: Los Angeles.