Fifty years ago today, at 8 PM (ET), an event occurred that changed the world forever. This is not hyperbole; the change may not have been as eventful as, say, the rock that took out the dinosaurs, but it has permeated our daily lives, everywhere on the planet.

What could this momentous event be?

It was the first television broadcast of Star Trek: Thursday, September 8, 1966.

I’ll give you a moment to either let that sink in, or to call me names. Or both. 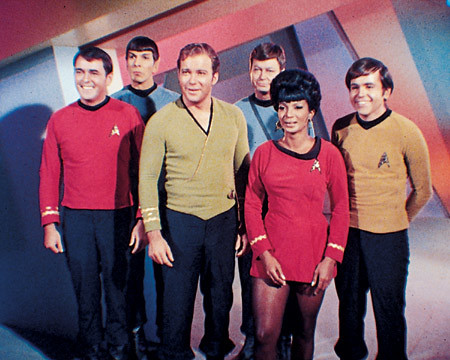 NBC saw Star Trek as a “monster-of-the-week show” to compete with ABC’s Voyage to the Bottom of the Sea and CBS’s Lost in Space. (CBS, who now co-owns “Star Trek” with Paramount Pictures, was originally offered the series but passed on it.) Gene Roddenberry, who created the show, saw it as an opportunity to tell stories about contemporary life in a “non-threatening” setting, as Rod Serling was doing on The Twilight Zone. The broadcast networks didn’t want you to talk about politics, race relations, the Cold War or the “Vietnam Conflict”—but you could talk about those things if it was the Federation versus the Klingons or the people were “aliens” who were black on one side and white on the other.

After struggling in the ratings for three seasons, Star Trek was canceled. But then a funny thing happened: right after its cancellation, the show was released for “strip syndication” (when reruns of a TV show are broadcast Monday through Friday) on local TV stations. People who liked the show could see it again and it was introduced to a new audience, just before or right after the evening news. In 1972 a convention for fans of the show was held in New York City. Three hundred people (tops) were expected to attend. Over three thousand showed up. 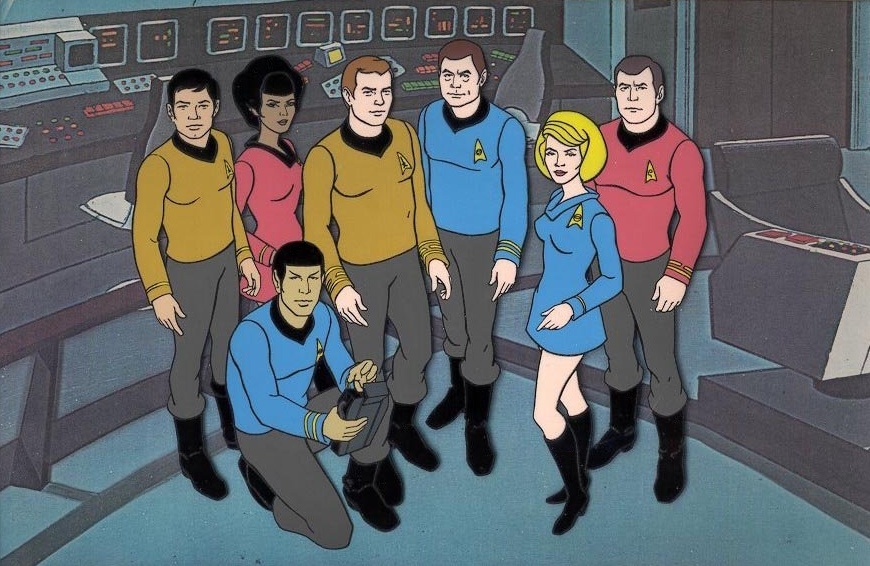 The continuing (and growing) interest in the show convinced Paramount (which now owned it) that a new series might be a good idea and Roddenberry went to work on Star Trek: Phase II. Then Paramount (who still had no real idea of the value of the property they had) thought maybe it should be a movie instead. And while they debated “TV or movie,” in 1977 Columbia Pictures released Close Encounters of the Third Kind, which proved that people were interested in science fiction movies. That same year, another rival studio, 20th Century Fox, released a movie that they had no idea how to market—nor how valuable a property it was, a movie simply titled… Star Wars.

And Paramount decided, “Movie it is!”

Star Trek: The Motion Picture (1979) was generally panned by the critics—and some fans—but it still made over $100 million (back when that was real money), and it spawned a sequel. And another sequel. And another. And one that almost ended the franchise. But they still made another one. And they launched a second television series, Star Trek: The Next Generation. And Star Trek: Deep Space Nine. And Star Trek: Voyager. And Enterprise (which later added Star Trek, colon to its name). And I forgot to mention there was also an animated series. 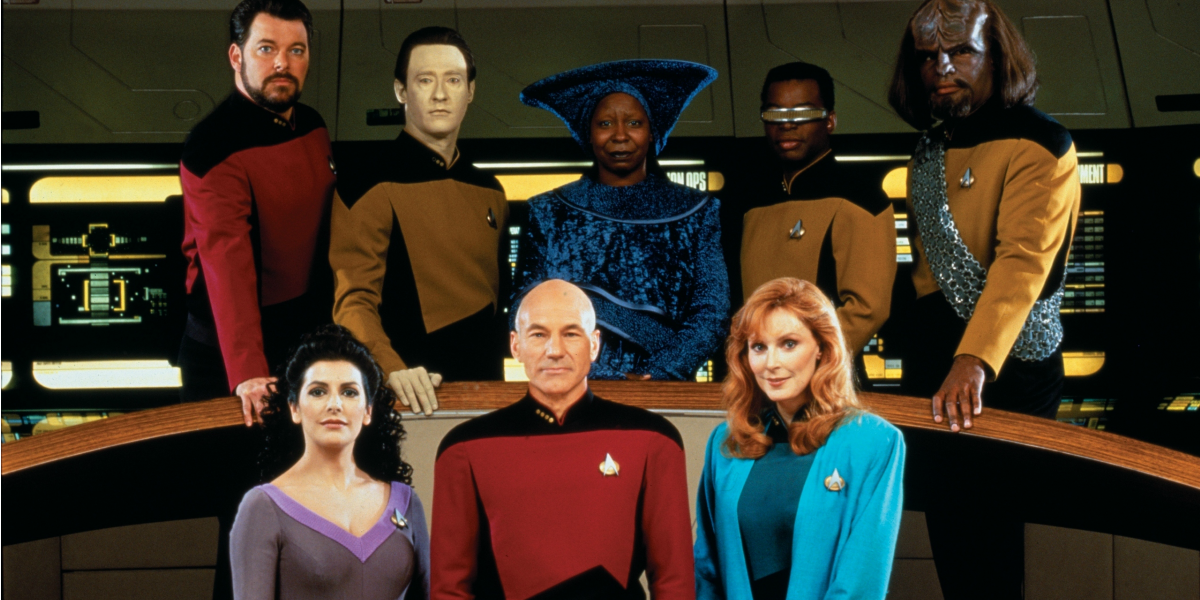 Why the enduring (some might say, “endless”) appeal of “just another TV show?”

For one thing, Star Trek was a departure from most (really, all) science fiction up to that time (and really, even since that time). It was/is the only science fiction world that presented a positive future. (Even a long time ago, in a galaxy far away, for the most part, things pretty much sucked.) But Star Trek said, it might take a couple of hundred years (we join the crew of the Enterprise in the year 2265), but we’re gonna be okay. It’s not just America that’s “great again,” it’s the whole freaking planet. We have somehow found a way to eliminate war, poverty, disease, and you can have just about anything you want—people don’t work for money; people work because they just want something rewarding and meaningful to do.

In his book Future Perfect: How Star Trek Conquered Planet Earth, Jeff Greenwald asked a number of people—fans, professionals, science-fiction authors, actors from the shows—why did they think Star Trek became and remains so popular. The answers came down to two things:

It went into syndication just as the Apollo program was winding down. Skylab, the Shuttle program, the Hubble Space Telescope, none of them could quite capture the imagination the way the Mercury, Gemini and Apollo Programs did. We went to the Moon a few times and never went back. Star Trek was a way for us to explore the universe, even if it was a made-up universe. 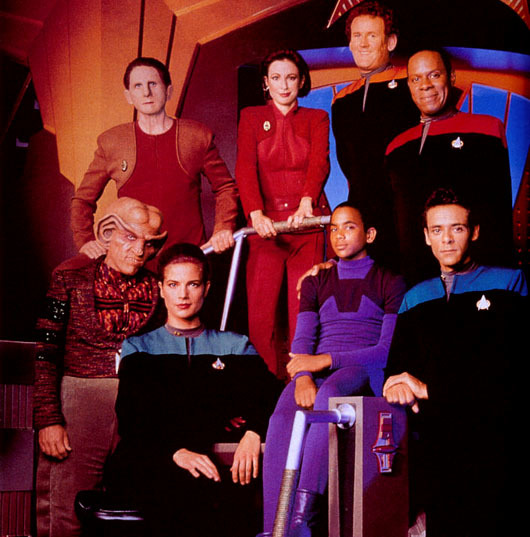 This point may be highly contested by some (for reasons too numerous to go into here) but by and large, Star Trek was ground-breaking entertainment both on the screen and behind the camera. It was the first original long-form television series to go directly into syndication (paving the way for things like all the original programming on the USA Network, for example) and it set the pattern for spinoffs. (All the incarnations of Law & Order, CSI, NCIS? They began with The Next Generation.)

(Okay, All in the Family begat Maude and The Jeffersons, The Mary Tyler Moore Show, led to Rhoda and Phyllis, but those shows didn’t take place in the same “universe.”)

Of course, nothing is that perfect and Star Trek has its flaws, other than costumes that look like pajamas (a lazy pejorative) or the abundance of Styrofoam rocks. TV shows may be about the future but they are produced in the present: despite its talk of equality for everyone, in the Original Series, women did not fare well—they were not allowed to command starships (they were seldom allowed to even carry weapons) and female Starfleet personnel all dressed like go-go dancers. (“Hoochie mamas,” for those of you too young to know what a “go-go dancer” was; even as late as 1987, Marina Sirtis described her early Counselor Troi look as “cosmic cheerleader.”) The Federation was JFK’s “New Frontier” in space and Starfleet often practiced “gunboat diplomacy” despite the (often-ignored) Prime Directive. (And the Federation Way was always the right way—even when it was wrong, it was for the right reason.) And remember that bit about “people don’t work for money?” Economists have suggested that such a society would only be possible if everyone not in Starfleet worked in a type of socialistic slavery to produce the starships, phasers and tricorders they used each week to save the universe. (Starfleet was the new “one-percenters.”)

As for the shows themselves, there was an overabundance of episodes hinging on the appearance of a heretofore unmentioned relative who popped up to complicate things or some equipment malfunction (transporter, followed by holodeck). And its idea of an “alien” was usually someone with a funny nose or forehead—or both.

But even if you’ve never watched any of the (to date) 546 hours of Star Trek TV shows and movies, you know where the terms “warp speed,” “beam me up,” and “space… the final frontier” come from. (Just like people who’ve never read Shakespeare know “to be or not to be” comes from something he wrote. Did you know that Hamlet has been translated into Klingon? The Bible, too.) phone was designed to look like an Original Series communicator. Apple originally wanted to call the iPad the PADD (“Personal Access Display Device,” what they called similar-looking things on The Next Generation, but Paramount wouldn’t give them permission). Google says they want to build the first computer that behaves like the one(s) on the Enterprise. (Did you know: 400,000 letters from fans “convinced” President Ford to “order” NASA to name the first Space Shuttle after the fictional starship?) Characters on the shows were using things that looked like (and sometimes inspired) 3.5” diskettes, Bluetooth earpieces, Google Glasses, virtual reality simulators, biomedical monitors, decades before such things became reality. (But, none of the starships had email…) A fourth “reboot” movie was announced before the third movie was released. And next January a new series, Star Trek: Discovery, is set to air (anachronism, since the series won’t be “broadcast” (except for the pilot) but streamed on CBS All Access). To some Star Trek may not be as “cool” as Hobbits or the Rebel Alliance(s)… but to a lot of people—and because of them—“Star Trek” will live long and prosper.