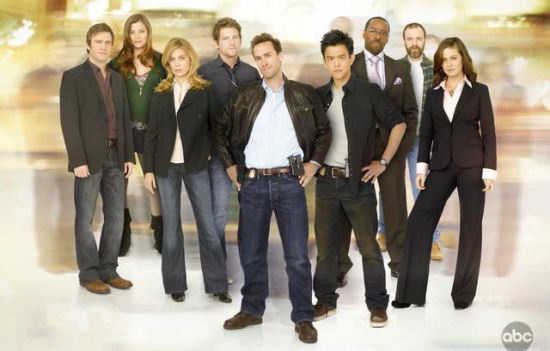 The most-hyped series of the new television season (after Glee and The Good Wife) is ABC’s FlashForward (Thursday, 8 PM ET). The network hopes it will be the next Lost only without getting viewers lost in the process.

Based on Robert J. Sawyer’s novel of almost the same title (Flashforward rather than the logo-friendly TV title), it harkens back to the heyday of Hollywood when movies made from books sometimes had little in common with the source material aside from the title. (Just once I’d like to see someone ‘fess up and admit it’s only "loosely based on the novel...")

The basic premise is the same: for two minutes seventeen seconds everyone on Earth looses consciousness and when they wake up (those who weren’t standing on ladders, aboard landing aircraft or on operating tables) most of them remember "visions," really actual experiences, from 2:17 in their own futures. But from this point on the two stories, while overlapping, diverge significantly. In the book people see twenty-one years into the future (to October 23, 2030), in the series it’s six months (to April 29, 2010). The protagonists in the book are CERN scientists—a couple of whom may have inadvertently caused the phenomenon; the series centers around a diverse group of ordinary people, among them (wait for it, wait for it…) a team of FBI agents, trying to figure out what happened. The characters in the book routinely discuss issues like the validity of the Minkowski block universe model or the effect of neutrinos on the quantum-mechanical processes underlying consciousness; the characters in the series are more concerned with some of the secondary issues raised in the book: What if in your vision of the future you’re with someone other than the person you’re with now? What does it mean if you have no vision of yourself in the future? And knowing what your future holds, can you change it?

After a winter break the series returns this Thursday and promises to show us WHAT HAPPENS 4/29/10 (which, interestingly enough, is its regularly-scheduled night). Some plot threads will be tied up, others left unraveled and... There may be another "flashforward."

(Incidentally: The novel was published in 1999, the story takes place in 2009 and 2030, so Sawyer had to write about things happening 10-30 years in the (then) future. There are a couple of glaring misses—he predicts flying (or at least, floating) cars and paper-thin PDA-like devices (the iPad?) but there’s no mention of anything resembling a cell phone in ‘09 or ‘30. No one has anything like a Facebook or MySpace account, no craigslist; no one even seems to have their own website. (The creation of an online forum for people to share their experiences is a big deal in the novel.) But some things he got pretty good: one he really nailed was that the pope in 2009 would be named Benedict XVI (John Paul II was still Pontiff until 2005). He also predicted an African American president in 2016. (Okay, he missed that one by eight years, but in 1999 Barack Obama was still in the Illinois State Senate). He also predicted computers would no longer have floppy disks, that there would be "another recession," and that the average salary in the US would be $157K but a loaf of bread would cost $4.00. (Well, one out of two…) Overall, not bad prognosticatin’.)