It was announced late today that Dwayne McDuffie, writer and co-founder of Milestone Media, died following a surgical procedure, two days after his forty-ninth birthday.

A Detroit native, McDuffie graduated the University of Michigan with an undergraduate degree in English and a graduate degree in physics. Moving to New York City to attend film school, he co-hosted a radio comedy program and wrote material for stand-up comedians and late-night television comedy programs. He interviewed for an assistant editor’s position at Marvel Comics and became an assistant for special projects.

He began writing stories for Marvel and created the series Damage Control, about a company that cleans up the damage caused by all those battles between superheroes and their adversaries. By 1990 he had become a freelance writer, producing stories for Marvel as well as DC and Archie comics. Wishing to express a multi-cultural sensibility he felt was missing in mainstream comics, he, along with Denys Cowan, Michael Davis and Derek T. Dingle, founded Milestone Media. At the time he said:

Milestone comics, distributed through DC Comics, ceased publication in 1997 but McDuffie continued his association with DC and its parent company Time Warner and developed his character Static Shock into an animated series. He became a staff writer for the animated series Justice League and was promoted to story editor and producer for Justice League Unlimited, either writing, producing, or editing 69 of the series 91 episodes.

Returning to the world of comics, McDuffie wrote for both DC and Marvel. He was hired by the Cartoon Network to revamp its series Ben 10, creating Ben 10: Alien Force, working as writer or story editor on all 46 episodes.

It would be a disservice to describ 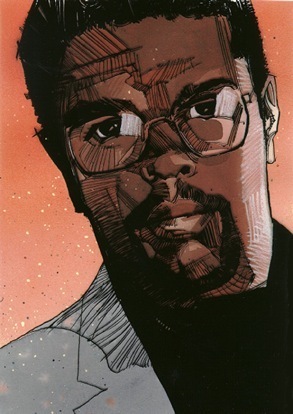 e McDuffie as “the black Stan Lee” or some similar comparative; we are long past the time that artists of color are only validated being viewed through the lens of “mainstream” society. It was not McDuffie’s desire to create the next Spider-Man but the first Someone Else, something original, unique. Something of his own. We can all honor him by pausing a moment to acknowledge his passing—then betting back to our keyboards and creating something of our own.