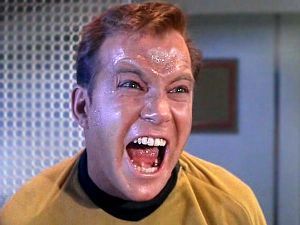 Then there was the time Romulans were destroying outposts along the Neutral Zone. When they got to see what the Romulans looked like and a crewmember suggested Spock might know something since they looked like him, Kirk sternly said he won't tolerate such talk on his bridge. He didn't say, "on his ship," or "we're gonna sign you up for Ethnic Sensitivity Training," just not on the bridge. What you say on your own time, however…

Then there was the time the entire crew was exposed to what amounted some really good weed (those spores that puffed out of those big plants) and Kirk is the only one left on the ship. He gets infected and is about to join everyone else on the surface when he gets angry and the spell is broken. He lures Spock back to the ship to help him reclaim his crew, but how can he make him angry enough to kill his buzz?

By playing the Dozens.

“All right, you mutinous, disloyal, computerized half‑breed, we’ll see about you deserting my ship.”The term ‘half‑breed’ is somewhat applicable, Spock says, but “computerized” is inaccurate. A machine can be “computerized,” not a man—“What makes you think you’re a man? You’re an over‑grown jackrabbit. An elf with a hyperactive thyroid… What do you expect from a simpering, devil‑eared freak whose father was a computer and his mother was an encyclopedia?” Spock informs Kirk that his father was an ambassador and his mother was a teacher, but Kirk is on a roll.“Your father was a computer, like his son. An ambassador from a planet of traitors. A Vulcan never lived who had an ounce on integrity… You’re a traitor from a race of traitors. Disloyal to the core, rotten like the rest of your subhuman race. And you’ve got the gall to make love to that girl… Does she know what she’s getting, Spock? A carcass full of memory banks who should be squatting on a mushroom instead of passing himself off as man? You belong in a circus, Spock, not on a starship. Right next to the dog‑faced boy—“

At this point, Spock has had quite enough and proceeds to knock some manners into the captain, snapping out of the thrall of the spores before he does any serious damage. (Can’t help but think Spock should have taken another couple of punches before he “snapped out of it completely,” but that’s just me.)

Now, it can be debated that Kirk needed to make Spock angry quickly and this was the best way to do it, but it could also be debated that some of Michael Richard’s best friends are black.(Continued…)