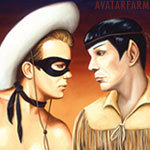 So, the five-year mission is over, Kirk is now an admiral, and maybe he's mellowed, right? When the young Vulcan science officer, who he personally recommended for the Enterprise, is killed by (wait for it, wait for it…) a transporter accident, Kirk grimly says he still wants a Vulcan in that spot. Now, this may have been in recognition of the fact that Vulcans scored higher on their SATs (Starfleet Aptitude Tests) than other candidates, but it sounds more like the person who prefers a "Jew lawyer/doctor/accountant" because "these people are good at that sort of thing." But the most grievous slight comes during the most bromantic moment of their friendship, when Spock dies saving the Enterprise from the wrath of Khan. 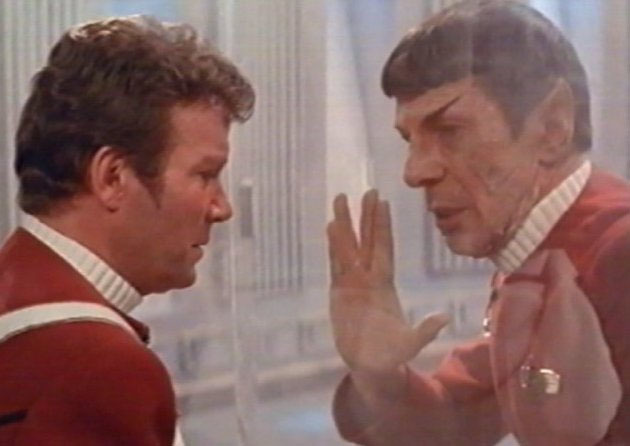 Now, as every biracial child can tell you, no matter what your genetic heritage, when people look at you, they are only going to see the predominant component. (Just ask Tiger, Halle, or the President. Okay, maybe not Tiger…) When someone looked at Spock, they saw a Vulcan. Spock never denied his Vulcan heritage. Spock was always rather harshly critical of human shortcomings and seldom gave them credit for anything positive. Maybe Data longed to be human, but not Spock. Make no mistake about it, Spock was no Uncle T'om.So, at his funeral, what does his best bud, the person who was supposed to be closer to him than anyone else in the universe say?"Of all the souls that I have touched… His was the most… (manly sob) …human."With that once sentence, Kirk negates everything Spock strived for his entire life. He was not saying Spock was a "humanoid life form or even a "bipedal primate mammal" but that Spock was "susceptible to or representative of the… frailties of human nature." (merriam‑webster.com/dictionary/human). It reminded me of a slave's tombstone I once saw in a black history museum, where the slave's "owner" extolled his virtues and magnanimously said his reward for being such a good and faithful servant would be to have his fondest wish granted now that he was in heaven (as a result of, etc.): now, he could be white.) When Savik looks away, I don't think it's because she's caught up in uncharacteristic emotion; I think it's because she's thinking, Oh, no he di'nt!The advertisments for the new Star Trek movie keep telling us “forget everything you know” and “this is not your father’s Star Trek” (or your mother’s, there’s that sexism again!). Let’s hope this is true. Kirk can still be Kirk and a little more PC, too.