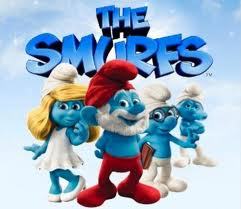 Last summer my son and I were spending some time together just talking and I called him a smurf. He asked me what was that? To my disbelief jr had not idea what I was talking about. He had no idea what a smurf was. I immediately explained what the smurfs were. We immediately proceeded to visit youtube and were there for the next few hours watching old smurf episodes.

Fast forward to this past month. We had the chance to see the new smurf movie and we both share an old sckool, new skool smurf moment.

This morning while researching for this post I ran across their history:

On October 23, 1958 the Smurfs made their first appearance in a story of Johan & Peewit in “Le Journal de Spirou”. Their creator Peyo had worked previously at a number of drawing jobs. But the introduction of the Smurfs into Spirou would change his life.

At first, the Smurfs were just secondary characters. But they soon became stars in their own right. After a few mini-albums, their tales began to appear as full albums. Then the film “The Smurfs and the Magic Flute” appeared, with music by Michel Legrand (he also sang in the chorus !).

Music provided the next big step also, when the Dutch singer Vader Abraham released the first Smurf single. It was a massive hit in Belgium and Holland, followed by the rest of the world. Soon, figurines, plushes, toys, (hit) records and above all the TV shows brought them right around the world. In 1981, the celebrated cartoon duo Hanna & Barbera (who created Tom & Jerry and later the Flinstones and Yogi Bear) started work on a TV series for the NBC network in the USA. No fewer than 256 episodes were produced, which are currently showing in roughly 30 countries.

Although their creator Pierre Culliford - better known as Peyo - is no longer with us since Christmas 1992, the Smurfs have never been so popular. Over 10 million copies of Smurf CDs have been sold in the last 3 years alone. The books, activity books, figurines and toys are amongst the most popular in the world. The TV series is regularly re-issued as video collections in dozens of languages, as well as CD-i and in storybook form.

And with the new style and the increasing range of Smurfimedia coming out, the little blue men are sure to have plenty of surprises for fans in the years to come.

This took me back to Saturday mornings of old. What do you think?

Tags: did, do, movie, see, smurf, the, think, what, you
Email me when people reply –
Follow