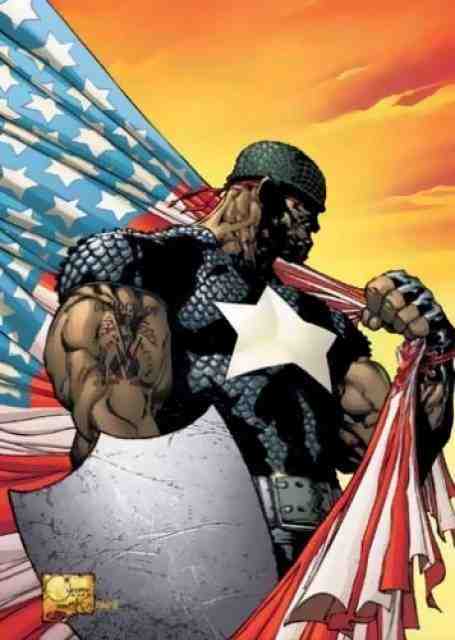 Marvel Comics’ Captain America Will Now Be A Black Man

Marvel already shook up the comics world by announcing that the popular Avengers character and Norse thunder god Thor would become a woman. A day later, the company revealed that longstanding superhero Captain America will hand over the shield to Sam Wilson, a Black man who is well known as The Falcon.

The news hit the airwaves last night on Comedy Central’s “The Colbert Report” with Marvel Chief Creative Officer Joe Quesada explaining the new shift. Essentially, Steve Rogers, the current Captain America, has been severely aged and lost his powers in a battle with a powerful foe. Falcon, a longtime partner of his, will take over the role in an upcoming book title this fall, “All-New Captain America.”

But Wilson’s turn with the shield isn’t the first time a Black man has held the role of America’s top soldier.

In 2003, Marvel released the comic mini-series “Truth: Red, White & Black,” which featured Black super soldier Isiah Bailey and super-powered son, Josiah X. With overtones of the Tuskegee Experiments and the like, the book touched on the dicey racial politics of the mid-20th century.

Marvel’s push for diversity isn’t a new thing for the company, as the character of Nick Fury, popularized by Samuel L. Jackson‘s portrayal in The Avengers film franchise, was formerly a White man. Reboots of “universes” in the world of comics is not new, which adds to the longevity of characters like Captain America who first debuted in 1941.

While fans are welcoming the changes, some readers wonder if this is a cheap ploy by Marvel to sell titles. Greater still, there are other Black characters in the vast Marvel comics universe that have yet to get recent top billing, such as Black Panther, the X-Men’s Storm, Monica Rambeau a.k.a. Spectrum, and a host of others.
Quesada said that the changes in the books will remain there for now and will keep the current Marvel Cinematic Universe largely intact.