I've been a reader of comic books most of my life.  Comic books, particularly those featuring Superman, my favorite superhero at one time, comprised for me one of several pathways into the wondrous world of science fiction.  Over the years, I became exposed to a range of superheroic representations.  There were the beings with god-like powers (Superman and Thor).  The brooding vigilantes (Batman) the brilliant, mechanically minded eccentrics (Tony Stark) the abrasive mutants (Wolverine) and the wise guys (Spider Man).  Then there were the supervillains.  They too covered a gamut of depictions.  Mad scientists (Lex Luther) raving maniacs (the Joker) and enormous superpowered brutes. (Doomsday). 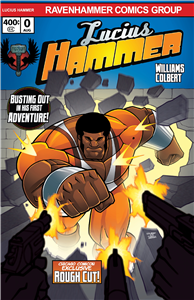 And he has drawn from that exposure to create a world of his own, populated by superheroes straight from the fertile seed bed of his imagination.  Some of you may not be into comic books, but I urge you to check out Brian's creations: Lucius Hammer and The Harlem Shadow.  Both comics are origin stories.  Lucius Hammer's story begins on a small Alabama farm where his display of superhuman strength as a child astonishes his parents.  The Harlem Shadow's debut is flashier and deadlier.  He dives into his crimefighting career literally from a Harlem rooftop.  Lucius Hammer grows up to become a superhero in the Luke Cage/Shaft mold.  But his experience is richer in that he followed different paths to reach the point where he could finally fulfill his ambition of being the hero he had always dreamed of becoming.  Now, here's where Brian adds his twist to the standard superhero convention.  He asks a question.  White superheroes have always been prominent in the mainstream.  They were lauded and admired by the majority populace for their feats of strength and daring.  But what if in that same reality there existed black superheroes who were just as physically and mentally gifted, but not so well publicized, not so praised?  How would the public react? How would the government respond? And to what extent would white superheroes be willing to coexist with their darker counterparts?

The first issue of Lucius Hammer poses those questions, with the promise of an answer as Brian introduces more characters, black and white, to this fantastic universe.  The writing is excellent.  Brian captures the distinctive voices of Lucius and Shadow with flair and precision. The artwork in both books is absolutely amazing.  In Lucius Hammer, the colors are vivid and the characters drawn in a manner that so evocatively and magnificently Another thing about Lucius and Shadow.  These are not separate characters.  They are linked in time and space.  Brian has created black superheroes that covered an expanse of twentieth century history.  Thus, Lucuis Hammer's decision to become a superhero is heavily influenced by a hero of an earlier age, the Harlem Shadow.  Brian will provide us with more of these linkages in forthcoming issues.  Again, I urge everyone to partake of these exciting, thought provoking tales.  Lucius Hammer and the Harlem Shadow! Get these babies while the getting is good!!

Tags: lucius, shadow!, and
Email me when people reply –
Follow