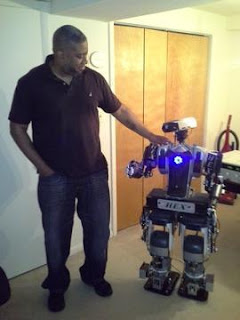 As a boy, Mark Haygood disassembled and attempted to rebuild his mother’s household gadgets, including radios and hair dryers. A combination of trial and error in building and a passion for science-fiction led him to create HEX, a four-foot, three-inch, 50-pound, full-sized humanoid robot.

Haygood, now 49 and retired after 22 years as a Baltimore City police officer, always had a penchant for techno gadgets.

“I was the really shy-in-the-basement-building-robots guy,” said Haygood.
Haygood said his robot—made up mostly of mostly household appliances, including a clock radio, fan, and DVD player--is one of few full-sized humanoids in America. According to Merriam-Webster’s Learner’s Dictionary, humanoids is a word used to describe something that is looks or acts “like a human.”

In 2009, Haygood moved to Philadelphia and ran into what quickly became his “favorite” bipedal humanoid robot, Hubo, an advanced, full-body humanoid created by one of the leaders in the field, Professor Jun-Ho Oh, and the Korea Advanced Institute of Science and Technology, according to gizmag, a widely respected magazine catering to new and emerging technologies, invention, innovation, and science news.

Released in 2005, Hubo cost under $1 million to build and is a competitor to Honda’s Aismo, which cost nearly $300 million and took almost twenty years to construct.

During a recent interview with the AFRO at his secluded home in Baltimore County, Haygood, the veteran officer and self-trained roboticist, powered up his human-like machine, equipped with flashing blue-neon lights and 3D-printer-made fingers. His “baby” as he refers to it, has the ability to move its arms and hands, rotate its head and hips, and soon, thanks to a newly installed speech synthesizer, will soon be able to speak.

“It’s the kind of machine that can only grow and become better,” said Haygood. He said that with “more sensors and functionality,” he can correct some minor design flaws of HEX and build a second, more cutting-edge robot.

Haygood requested the AFRO not to print the cost of creating HEX other than to say the price tag is under $100,000 and that it is the “cheapest humanoid robot you can make.” HEX was a four -year project for Haygood. Now more knowledgeable and confident, Haygood estimates that he can replicate HEX in about five months and cut costs by 40 percent.

Searching for a place to enhance his work, Haygood joined Baltimore’s Hackerspace in August 2012. He describes the Hackerspace as a place where “a whole bunch of Macgyvers get together to build stuff,” he said, referring to the TV show about a super geek who solves crimes. He pays a $50 monthly fee to have 24-hour access to equipment and professional programmers, hackers, and builders.

Although Haygood is now a proud member of a Hackerspace, he labels himself an “introvert.”

“It’s a weird situation to be in,” said Haygood as he described being a reserved person while working in a public field. Haygood said he survived by fulfilling his job and duties and not showing his “real self.” “Some people see violence and it rolls off their shoulders, but people like me can’t deal with it,” he added. The aggressive and open nature of being an in-the-field officer was a reason why Haygood decided to retire after 22 years and be “done with the war.”

Instead, his passion was to spend countless hours in the basement, tinkering with his mother’s objects, striving to build a robot.

“He used to scare me with his ability to invent things sometimes,” said Vivian Haygood, Mark’s mother. “It was just incredible what he could do with his hands and it’s been like that since he was a child and all the way up to adulthood.”
April is an important month for Haygood and the future of his robotic ambition.

Within weeks, he plans to launch a fundraiser to raise $50,000-- using Kickstarter.com, a crowd-funding website--to “correct the design flaws” in HEX, “build another bot, and have a lot left over for some additional things that are needed.”

Like some international robot builders, Haygood wants to create humanoids that can assist humans with daily activities. In 2011, the British Broadcasting Corporation reported that South Korea was testing out robots as prison wardens. In 2012, the Buffalo News reported that a sick child used a $4,839 “Roboswot” to virtually attend a class in New York when he was ill. News reports have also shown that robots have been used in classrooms to teach children Enlish.

Along with members of his Hackerspace, Haygood plans to attend the 14th annual Robot Fest on April 27 in Lithicum, Md. to promote HEX to children and other robot-friendly spectators.

“I want to help kids. I want to teach kids. I want kids to get a shot of adrenaline in the arm as far as advanced fields of robots are concerned.” 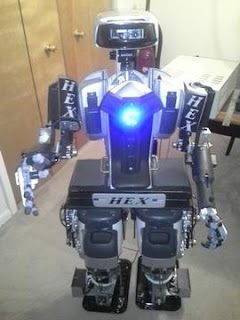