Just got back from the 3D Printer World Expo in Burbank, California! 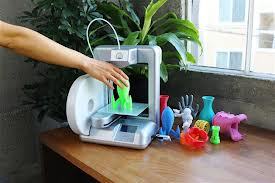 I called this a few years back when I first saw that 3D printers were being marketed on the convention floor of Siggraph as being the future trend of all trends!

The possibilities of using 3D printers for everything from common kitchen utensils to toy modeling and jewelry to special effects molds were endless!

Anyone working with prosthetics be they for medical purposes or monster movie making should look into getting a 3D printer!

Pixologic the company that had the audacity to have a Zbrush sculpt off challenge between several artists almost tempted me to sit down in the front row and heckle the combatants to see if I could get tossed into the mix with my verbal taunts... I aint scared of you! Lol

Anyway... In my extensive research on this matter I asked the questions I felt best that needed answering and have narrowed down at least one company or product line that is suitable by price range for any budding 3D printer specialist to start off with.

Makerbot seems the most user friendly as well as award winning line of printers and they got bought out by Stratasys who seem to make the better overall higher end line of printers for those of us on a Bill Gates budget where money is no Objet... OOPS I mean object but Stratasys does own the Objet line too which means they are in the game at all levels of the playing field from amateur to the pros!

Yes there are 3D printers priced at $650,000 but you really can do so much already with those in the $500-$2,000 range that spending that type of money without Disney's financial backing is pushing it!

Overall the convention was nothing like Comic-con or even Siggraph for that matter as it was mostly business persons with a random geek or two every other person but I believe that I found out what I needed to know and will make the appropriate decisions real soon!

Software like Zbrush, Lightwave and open source free Blender all have 3D print capabilities so if you always wanted to know what your creator owned character looked like in toy form this is your chance!

I loaded some pics for added value to prove what could be done with a 3D printer and a good imagination!

Tron... Aliens... Ronald T. Jones Big Head... It's all possible and just around the corner!