Which one of you black sci-fi persons caught the season opening episode? 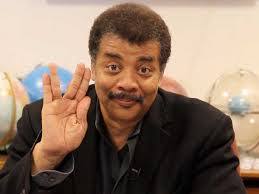 I watched it and found it to be very fascinating and informative and will watch the later episodes!

I am a Dr. Tyson fan at this point so I hope he brings more to the table!

If there were one thing that I had issue with is when Dr. Tyson who happens to the the most famed scientist at the moment continually gets caught up in the Creationism versus Atheism wars that has gotten old!

He seems to be in a tug of war of sorts trying to please the Richard Dawkins crowd and having a producer like Seth Macfarlane who has his own agenda against the religious crowd who could single handedly boost his ratings into Super Bowl territory!

As a very popular black scientist his stock is rising but he should be more like Jodie Foster was in the movie Contact and let either side prove their points like Morgan Freeman does in Through The Wormhole in a sort of neutral position!

Morgan Freeman's show seems to let multiple sides offer their views no matter how controversial so it would be nice if Dr. Tyson's show allowed those who might not agree with him or his financial backers with an opportunity to produce their own evidence on the show!

In science there are concepts like the Geologic Column which has fallen under heavy scrutiny for not being accurate or existing anywhere on the planet earth along with other scientific conclusions like the carving of the Grand Canyon above/below sea level by water that not only travels uphill but does not carve the same way around areas outside of the Grand Canyon... That's some conveniently sharp water that loses it's sharpness in key areas upstream as well as downstream go figure!

It seems like certain things are pushed through too quickly as scientific fact like the Big Bang Theory which should explode in a particular direction by scientific laws and yet many planets and moons orbit in opposite directions defying these laws!

Or spiral galaxies which in theory should either crash into themselves or tear widely apart... Cause that's what spirals do widen or tighten! Lol

Or... Certain heavenly celestial bodies that give off energy or radiation patterns with no mass renewable energy sources and yet held together over 13.8 billion years without burning themselves out!

The special effects are excellent and Dr. Tyson has that black Captain Kirk vibe going on so he needs a crew of experts to come on the show with him and expound further!

I highly recommend this show for scientists, creationists and anyone with lots of time on their hands because it's pure fun!

It's up to the viewer to decide what is fact or fiction and... "Question Everything!"