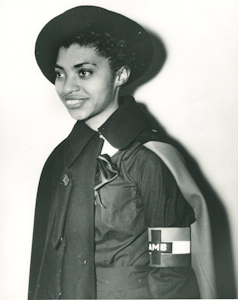 The Spanish Civil War (1936-39) is a conflict that is almost lost in the long shadow cast by WW2. Yet like Mussolini’s brutal campaign against Ethiopia, it was one of the first battlegrounds against fascism. While Nazi Germany and Fascist Italy supported the right-wing General Francisco Franco, with weapons and bombing campaigns, the leftist Republican government was supported in part by France, Mexico and the Soviet Union.

Beyond nation-states, brigades of international volunteers also flocked to fight what they saw as a war against fascism. Some forty thousand men and women from fifty-two countries, many of them socialists, communists and radicals, traveled to Spain to join the International Brigades in support of the anti-fascist Republican government. Some 2,800 of them were from the United States, and served in what was called the Abraham Lincoln Brigade. Composed of regiments with such names as the George Washington Battalion, the Abraham Lincoln Battalion and even the John Brown Anti-Aircraft Battery the group was composed of people from varied walks of life, men and women and (surprising for its age) multiracial. Among them were a good number of African-Americans, who identified with the leftist Republican government’s fight against fascism:

One of these black volunteers was Salaria Kea, who at the age of 23 traveled overseas to serve in a medical mission in Spain for the leftist brigades; she would tour throughout the US during the war, pleading the cause of the anti-fascist struggle. Other African-Americans would serve as soldiers and even commanders of battalions, while notable black figures like Paul Robeson openly campaigned for the anti-fascist Republican factions:

The lynching of Negroes in America, discrimination in education and on jobs, lack of hospital facilities for Negroes in most cities and very poor ones in others, all this appeared to them as part of the picture of fascism: of a dominant group impoverishing and degrading a less powerful group. The open pronouncements of Germany and Italy against all non-Aryans is convincing evidence. Thinking thus, hundreds of Negro men went to Spain. Here in the international Brigade of Volunteers they found other Negroes. From Djibouti, Emperor Haile Selassie’s chief mechanic came to strike a blow for a free Ethiopia.’ From South Africa, from Cuba, from French Senegal, from Haiti, from the Cameroon’s, Negroes came, stayed and fought.–excerpt from A pamphlet issued by the Negro Committee to Aid Spain with the Medical Bureau and North American Committee to Aid Spanish Democracy, New York, 1938. Reprinted at the Abraham Lincoln Brigade Archives.

So what does this have to do with dieselpunk? Check out the rest of this article at my blog below to find out:

Next up, the Italo-Abyssinian War of 1935 and a world of alternate history dieselpunk waiting to be explored...