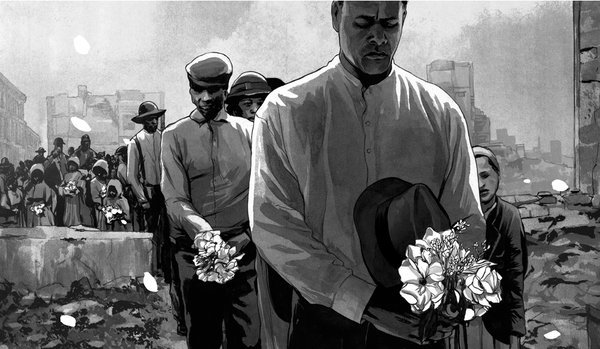 MOST Americans know that Memorial Day is about honoring the nation’s war dead. It is also a holiday devoted to department store sales, half-marathons, picnics, baseball and auto racing. But where did it begin, who created it, and why?

At the end of the Civil War, Americans faced a formidable challenge: how to memorialize 625,000 dead soldiers, Northern and Southern. As Walt Whitman mused, it was “the dead, the dead, the dead — our dead — or South or North, ours all” that preoccupied the country. After all, if the same number of Americans per capita had died in Vietnam as died in the Civil War, four million names would be on the Vietnam Veterans Memorial, instead of 58,000.

Officially, in the North, Memorial Day emerged in 1868 when the Grand Army of the Republic, the Union veterans’ organization, called on communities to conduct grave-decorating ceremonies. On May 30, funereal events attracted thousands of people at hundreds of cemeteries in countless towns, cities and mere crossroads. By the 1870s, one could not live in an American town, North or South, and be unaware of the spring ritual.

But the practice of decorating graves — which gave rise to an alternative name, Decoration Day — didn’t start with the 1868 events, nor was it an exclusively Northern practice. In 1866 the Ladies’ Memorial Association of Columbus, Ga., chose April 26, the anniversary of Gen. Joseph Johnston’s final surrender to Gen. William T. Sherman, to commemorate fallen Confederate soldiers. Later, both May 10, the anniversary of Gen. Stonewall Jackson’s death, and June 3, the birthday of Jefferson Davis, were designated Confederate Memorial Day in different states.

Memorial Days were initially occasions of sacred bereavement, and from the war’s end to the early 20th century they helped forge national reconciliation around soldierly sacrifice, regardless of cause. In North and South, orators and participants frequently called Memorial Day an “American All Saints Day,” likening it to the European Catholic tradition of whole towns marching to churchyards to honor dead loved ones.

But the ritual quickly became the tool of partisan memory as well, at least through the violent Reconstruction years. In the South, Memorial Day was a means of confronting the Confederacy’s defeat but without repudiating its cause. Some Southern orators stressed Christian notions of noble sacrifice. Others, however, used the ritual for Confederate vindication and renewed assertions of white supremacy. Blacks had a place in this Confederate narrative, but only as time-warped loyal slaves who were supposed to remain frozen in the past.

The Lost Cause tradition thrived in Confederate Memorial Day rhetoric; the Southern dead were honored as the true “patriots,” defenders of their homeland, sovereign rights, a natural racial order and a “cause” that had been overwhelmed by “numbers and resources” but never defeated on battlefields.

Yankee Memorial Day orations often righteously claimed the high ground of blood sacrifice to save the Union and destroy slavery. It was not uncommon for a speaker to honor the fallen of both sides, but still lay the war guilt on the “rebel dead.” Many a lonely widow or mother at these observances painfully endured expressions of joyous death on the altars of national survival.

Some events even stressed the Union dead as the source of a new egalitarian America, and a civic rather than a racial or ethnic definition of citizenship. In Wilmington, Del., in 1869, Memorial Day included a procession of Methodists, Baptists, Unitarians and Catholics; white Grand Army of the Republic posts in parade with a black post; and the “Mount Vernon Cornet Band (colored)” keeping step with the “Irish Nationalists with the harp and the sunburst flag of Erin.”

But for the earliest and most remarkable Memorial Day, we must return to where the war began. By the spring of 1865, after a long siege and prolonged bombardment, the beautiful port city of Charleston, S.C., lay in ruin and occupied by Union troops. Among the first soldiers to enter and march up Meeting Street singing liberation songs was the 21st United States Colored Infantry; their commander accepted the city’s official surrender.

Whites had largely abandoned the city, but thousands of blacks, mostly former slaves, had remained, and they conducted a series of commemorations to declare their sense of the meaning of the war.

The largest of these events, forgotten until I had some extraordinary luck in an archive at Harvard, took place on May 1, 1865. During the final year of the war, the Confederates had converted the city’s Washington Race Course and Jockey Club into an outdoor prison. Union captives were kept in horrible conditions in the interior of the track; at least 257 died of disease and were hastily buried in a mass grave behind the grandstand.

After the Confederate evacuation of Charleston black workmen went to the site, reburied the Union dead properly, and built a high fence around the cemetery. They whitewashed the fence and built an archway over an entrance on which they inscribed the words, “Martyrs of the Race Course.”

The symbolic power of this Low Country planter aristocracy’s bastion was not lost on the freedpeople, who then, in cooperation with white missionaries and teachers, staged a parade of 10,000 on the track. A New York Tribune correspondent witnessed the event, describing “a procession of friends and mourners as South Carolina and the United States never saw before.”

The procession was led by 3,000 black schoolchildren carrying armloads of roses and singing the Union marching song “John Brown’s Body.” Several hundred black women followed with baskets of flowers, wreaths and crosses. Then came black men marching in cadence, followed by contingents of Union infantrymen. Within the cemetery enclosure a black children’s choir sang “We’ll Rally Around the Flag,” the “Star-Spangled Banner” and spirituals before a series of black ministers read from the Bible.

After the dedication the crowd dispersed into the infield and did what many of us do on Memorial Day: enjoyed picnics, listened to speeches and watched soldiers drill. Among the full brigade of Union infantrymen participating were the famous 54th Massachusetts and the 34th and 104th United States Colored Troops, who performed a special double-columned march around the gravesite.

The war was over, and Memorial Day had been founded by African-Americans in a ritual of remembrance and consecration. The war, they had boldly announced, had been about the triumph of their emancipation over a slaveholders’ republic. They were themselves the true patriots.

Despite the size and some newspaper coverage of the event, its memory was suppressed by white Charlestonians in favor of their own version of the day. From 1876 on, after white Democrats took back control of South Carolina politics and the Lost Cause defined public memory and race relations, the day’s racecourse origin vanished.

Indeed, 51 years later, the president of the Ladies’ Memorial Association of Charleston received an inquiry from a United Daughters of the Confederacy official in New Orleans asking if it was true that blacks had engaged in such a burial rite in 1865; the story had apparently migrated westward in community memory. Mrs. S. C. Beckwith, leader of the association, responded tersely, “I regret that I was unable to gather any official information in answer to this.”

Beckwith may or may not have known about the 1865 event; her own “official” story had become quite different and had no place for the former slaves’ march on their masters’ racecourse. In the struggle over memory and meaning in any society, some stories just get lost while others attain mainstream recognition.

AS we mark the Civil War’s sesquicentennial, we might reflect on Frederick Douglass’s words in an 1878 Memorial Day speech in New York City, in which he unwittingly gave voice to the forgotten Charleston marchers.

He said the war was not a struggle of mere “sectional character,” but a “war of ideas, a battle of principles.” It was “a war between the old and the new, slavery and freedom, barbarism and civilization ... and in dead earnest for something beyond the battlefield.” With or against Douglass, we still debate the “something” that the Civil War dead represent.

The old racetrack is gone, but an oval roadway survives on the site in Hampton Park, named for Wade Hampton, former Confederate general and the governor of South Carolina after the end of Reconstruction. The old gravesite of the Martyrs of the Race Course is gone too; they were reinterred in the 1880s at a national cemetery in Beaufort, S.C.

But the event is no longer forgotten. Last year I had the great honor of helping a coalition of Charlestonians, including the mayor, Joseph P. Riley, dedicate a marker to this first Memorial Day by a reflecting pool in Hampton Park.

By their labor, their words, their songs and their solemn parade on their former owners’ racecourse, black Charlestonians created for themselves, and for us, the Independence Day of a Second American Revolution.

David W. Blight, a professor of history and the director of the Gilder Lehrman Center for the Study of Slavery, Resistance and Abolition at Yale, is the author of the forthcoming “American Oracle: The Civil War in the Civil Rights Era.”