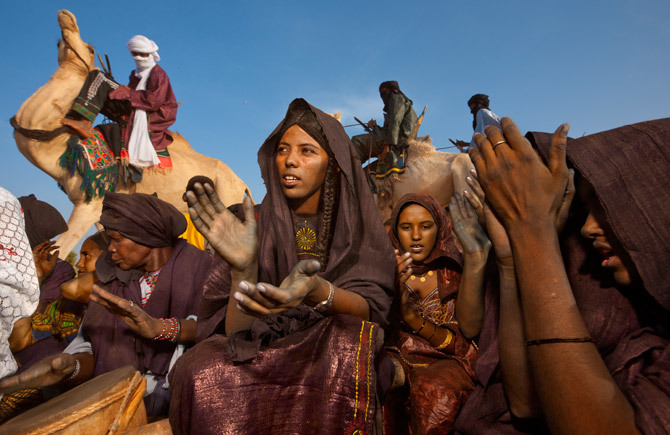 Their hands stained by the indigo dye in their new clothes, Tuareg women celebrate a birth. Tuareg females rarely cover their faces, while men traditionally wear turbans that conceal all but their eyes.
By Peter Gwin
Photograph by Brent Stirton

Staff writer Peter Gwin received a grant to research the Tuareg from the Pulitzer Center on Crisis Reporting as part of its Untold Stories series.

The rebel commander, his face hidden behind a dark turban, leads the way over the soft sand, scorched black in places by exploded mortar shells and littered with detritus from a series of battles waged here, on a children's soccer field.

With nearly every stride, our feet crunch spent rifle cartridges. "Step in my steps," he cautions, noting that the Niger army had mined the area, where there had been a school for Tuareg. His men removed some of the devices; others remained lost in the shifting sands. "Maybe they are buried too deep to explode if you step on one."

It is late afternoon in the dry season, and the temperature has finally slipped below 100°F. The beige dunes stretching to the north begin to take on a pink hue, and the shadows from the steep ridges to the southwest are spreading across the valley floor. In this lonely valley called Tazerzaït, where the Aïr Massif meets the great sand seas of the Sahara, the commander's men had won the greatest victory of their two-year rebellion against the Niger government.

The rebels, all ethnic Tuareg, descend from the fierce nomads who for several centuries dominated the lucrative caravan trade in gold, spices, and slaves that crisscrossed this desolate region of North Africa. Fighting under the banner of the Movement of Nigeriens for Justice (MNJ) and supported in part by Libyan leader Muammar Qaddafi, they had captured 72 government soldiers at Tazerzaït and renewed their demands that the government share revenue derived from another source of treasure: uranium mined on Tuareg lands. In a show of goodwill the Tuareg released all of their prisoners—except one. "He is a war criminal," the commander says.

As we walk, the commander explains that local Tuareg built the school at Tazerzaït because it is near a well central to the region's far-flung grazing areas, allowing families to visit their children as they moved their herds. Previously, locals who wanted their children educated had to send them to far villages and rarely saw them.

"My father only knew how to live in the desert," the commander says. "He knew how to make the salt caravan to Bilma, how to find grazing in the desert, how to hunt antelope in the canyons and wild sheep in the mountains. And that is what I know, but the life of the desert is ending. Our children need school."

We reach the top of a small bluff where three mud-brick classrooms stand, their walls gouged with bullet holes, their roofs missing. The chalkboards are covered with graffiti left by the Nigerien soldiers—French profanities and cartoons depicting Tuareg having sex with animals.

Four rebels with Kalashnikovs slung over their shoulders have brought the alleged war criminal down from the mountain cave where they are holding him. His posture is slumped, like a sulking teen, and he crosses and uncrosses his arms, eyes darting among the men. The sleeves of his camouflage shirt are cut off and his combat boots are untied. He claims to be 27 years old, but his round face and awkward manner make him look much younger.

It is growing late, and the rebels are edgy about lingering in this exposed position. The Niger army had countered its defeat on the ground by acquiring helicopters, and the rebels had recently been surprised by an assault from the air that killed several men, including one of their leaders. The men squint toward the horizon, and periodically everyone goes silent to listen for the sounds of blades beating the air. "They buy helicopters to fight us, but they will not build schools or wells for us," the commander says, as he leads the way to the edge of the school grounds. The prisoner trails behind, his head bowed, bootlaces skipping along the ground. The commander stops at a place where stones set in the soft sand mark out three graves.

"Three old men are buried here," the commander says. "When the army attacked," he points to one of the graves, "this man, who was blind, refused to flee." He motions to the other graves. "These two refused to leave him." He describes how the soldiers accused the old men of helping set land mines. "That night they tortured them behind the classrooms. We were hiding in the mountains, just there," he says, gesturing to a ridgeline above us. "We could hear the old men screaming." He spoke quietly. "This one," he points to the grave in the center, "is my father."

To reach this remote corner of the world's largest desert requires traversing a vast primordial landscape—a place defined by salt pans that take the better part of a day to cross, dune fields that rise and fall like violent seas, and mammoth outcroppings of glassy marble and obsidian that breach the sand like extinct sea creatures. Countless generations of Tuareg warriors ruled this realm, demanding tribute from merchants plying the caravan routes and raiding sedentary tribes along the Niger River for animals and slaves. Guided by the proverb "Kiss the hand you cannot sever," the Tuareg gained a reputation for brutality and treachery, often robbing the very caravans they were hired to protect and launching surprise attacks on their allies.

At the turn of the 20th century, the Tuareg were the last of the West African peoples to be pacified by the French, and their lands were absorbed into parts of Niger, Mali, Algeria, and Libya. Those governments generally ignored their fractious Tuareg minorities, leaving them to wander the desert with their flocks of camels and goats. But in recent decades, as less and less rain fell during the wet seasons, Tuareg families struggled to sustain sizable herds. "Animals are everything to a Tuareg," an elderly nomad once explained to me. "We drink their milk, we eat their meat, we use their skin, we trade them. When the animals die, the Tuareg dies."

With their herds declining, many Tuareg in Niger began asking why the government wasn't sharing the wealth derived from the rich uranium deposits that for decades have been mined from their grazing lands. During the 1990s a Tuareg militia, many of its members trained and armed by Qaddafi, fought the Niger army over the issue. A peace accord was signed, but little changed. In 2007 the government was negotiating contracts with France projected to make Niger the world's second largest uranium producer. More deals allowed foreign companies to explore the desert for other resources. With the nation mired in poverty and the government refusing to make meaningful investments in Tuareg-dominated areas, the nomads rebelled again. Meanwhile, drug smugglers and a North African offshoot of al Qaeda established themselves in the region, and the Niger government accused the Tuareg of being involved with them.