"There was always a crowd before the cage, most of the time roaring with laughter, and from almost every corner of the garden could be heard the question 'Where is the Pygmy?" and the answer was, 'in the monkey house.' ....Several times the pushing and groping became so ugly, the police were summoned..."--New York Times, 1906

After a recent Psychology Today article exposed the persistent staying power of scientific racism, revisiting some of the more famous incidents such as Ota Benga's tragic life seemed appropriate.The following article is from the UK Daily Mail online.

Caged in the human zoo: The shocking story of the young pygmy warrior put on show in a monkey house - and how he fuelled Hitler's twisted beliefs 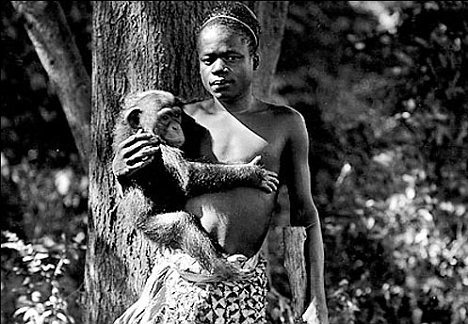 The young African boy bared his teeth at the men and women staring at him through the bars. They were sharpened into dagger-like points, making him appear all the more barbaric to the ignorant hordes.

Above the cage hung a sign proclaiming: 'The Missing Link.' A baby chimp sat disconsolately at the bottom of the enclosure, a single companion to the boy.

The year was 1906. This was a pygmy, brought to America as a novelty to be put on display in the monkey house.

The New York Times reported: 'There were 40,000 visitors to the park on Sunday. Nearly every man, woman and child of this crowd made for the monkey house to see the star attraction in the park - the wild man from Africa.

'They chased him about the grounds all day, howling, jeering, and yelling. Some of them poked him in the ribs, others tripped him up, all laughed at him.'

Suddenly, the boy turned. Taking the bow and arrow given to him as an ethnic accessory, he shot at the gawpers. His arrow did no harm, but he did scare the life out of the onlookers.

This was Ota Benga, a pygmy, brought from the Congo and put on display in a zoo as an example of what scientists at the time proclaimed to be an evolutionary inferior race.