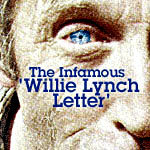 I long ago stopped listening to sentences that began with “The problem with black people” or ended with “and that’s why black people can’t get ahead now,” -- which partly explains my initial disinterest in now-famous William Lynch Speech. In the few years since the speech on how to train slaves first appeared, it has been cited by countless college students, a black member of the House of Representatives and become the essential verbal footnote in barbershop analysis of what’s wrong with black people. The rapper Talib Kweli laments on the song “Know That” “blacks are dyin’/how to make a slave/by Willie Lynch is still applyin’” and one professor at a mid-western university made the speech required reading for her class. Of late, the frequency of its citations seems to be increasing – at least three people have asked me about it in the last month.

According to the speech’s preface, Master Lynch was concerned enough with the fortunes of his slave-holding brethren in the American colonies to give a speech on the bank of the James River explaining how to keep unruly servants disunited. The old, he argued, should be pitted against the young, the dark against the light, the male against the female and so on. Such disunifying tactics “will control the slaves for at least 300 years,” he guaranteed. And that, it seems, is why black people can’t get ahead now.

There are many problems with this document – not the least of which is the fact that it is absolutely fake.

As a historian, I am generally skeptical of smoking guns. Historical work, like forensic science, is more about the painstaking aggregation of facts that lead researchers to the most likely explanation, but rarely the only one. Slavery was an incredibly complex set of social, economic and legal relations that literally boiled down to black and white. But given the variation in size of farms, number of enslaved workers, region, crops grown, law, gender-ratios, religion and local economy, it is unlikely that a single letter could explain slave policy for at least 151 years of the institution and its ramifications down to the present day.

Considering the limited number of extant sources from 18th century, if this speech had been “discovered” it would’ve been the subject of incessant historical panels, scholarly articles and debates. It would literally be a career-making find. But the letter was never “discovered,” but rather it “appeared” – bypassing the official historical circuits and making its way via internet directly into the canon of American racial conspiratoria.

On a more practical level, the speech is filled with references that are questionable if not completely inaccurate. Lynch makes reference to an invitation reaching him on his “modest plantation in the West Indies.” While this is theoretically possible – the plantation system was well-established in the Caribbean by 1712 – most plantation owners were absentees who chose to remain in the colonizing country while the day-to-day affairs of their holdings were run by hired managers and overseers. But assuming that Mr. Lynch was an exception to this practice, much of the text of his “speech” is anachronistic. Lynch makes consistent reference to “slaves” – which again is possible, though it is far more likely people during this era would refer to persons in bondage simply as “Negroes.” In the first paragraph, he promises that “Ancient Rome would envy us if my program is implemented,” but the word “program” did not enter the English language with this connotation until 1837 – at the time of this speech it was used to reference a written notice for theater events.

Two paragraphs later he says that he will “give an outline of action,” for slave-holders; the word “out-line” had appeared only 50 years earlier and was an artistic term meaning a sketch – it didn’t convey it’s present meaning until 1759. Even more damning is his use of the terms “indoctrination” and “self-refueling” in the next sentence. The first word didn’t carry its current connotation until 1832; the second didn’t even enter the language until 1811 -- a century after the purported date of Lynch’s speech. More obviously, Lynch uses the word “Black,” with an upper-case “B” to describe African Americans more than two centuries before the word came to be applied as a common ethnic identifier.

In popular citations, Lynch has also been – inexplicably – credited with the term “lynching” which would be odd since the speech promises to provide slave-holders with non-violent techniques that will save them the expense of killing valuable, if unruly, property. This inaccuracy points to a more basic problem in understanding American history.

The violence directed at black people in America was exceptional in the regard that it was racialized and used to reinforce political and social subordination, but it was not unique. Early America was incredibly violent in general – stemming in part from the endemic violence in British society and partly from the violence that tends to be associated with frontier societies. For most of its history, lynching was a non-racial phenomenon– actually it was racial in that it was most often directed at white people. “Lynch law” was derived from the mob violence directed at Tories, or British loyalists, just after the American Revolution. While there is disagreement about the precise origins of the term – some associate it with Charles Lynch, a Revolution-era Justice-of-the-Peace who imprisoned Tories, others see it as the legacy of an armed militia founded near the Lynche River or the militia captain named Lynch who created judicial tribunals in Virginia in 1776 – there is no reference to the term earlier than 1768, more than half a century after the date given for the speech.

Given the sparse judicial resources (judges were forced to travel from town-to-town hearing cases, which is where we get the term “judicial circuit”) and the frequency of property crimes in the early republic, lynching was often seen as a form of community justice. Not until the 1880s, after the end of Reconstruction, did “lynching” become associated with African Americans; gradually the number of blacks lynched each year surpassed the number of whites until it became almost exclusively directed at black people late in the century.

On another level, the Willie Lynch speech would seem to give a quick-and-easy explanation of the roots of our much-lamented “black disunity.” You could make similar arguments about the lingering effects of a real historical document like the 1845 tract “Religious Instruction of Negroes” – written by a proslavery Presbyterian minister -- or the British practice of mixing different African ethnicities on slave ships in order to make communication – and therefore rebellion – more difficult. But this too is questionable – it presumes that whites, or any other diverse group, do not face divisive gender issues, generation gaps and class distinctions. Willie Lynch offers no explanation for the white pro-lifer who guns down a white abortion-provider or white-on-white domestic violence. He does not explain political conflicts among different Latino groups or crime in Asian communities. Unity is not the same as unanimity and in the end, black people are no more disunited than any other group of people – and a lot more united than we give ourselves credit for.