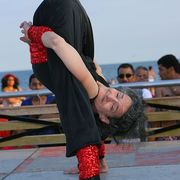 http://www.reverbnation.com/amazingamycontortionistuniqueyogadancer#! July 31, 2010, The Amazing Amy won FIRST PRIZE in the Coney Island Talent Show in the Circus Freaks and Side Show Geeks category!! http://www.thirstygirlproductions.com/pdf/talent_show_results.pdf May 14, 2011, Amazing Amy won THIRD PRIZE in the Highway to Health Music For a Better America Talent Competition - Adult Category - performing Techno Trance Yoga Dance!! http://highwaytohealthfestival.com/NY/NYCHighwaytoHealthResults.pdf The Amazing Amy - now the subject of a VIDEO DOCUMENTARY! VIEW PROFESSIONALLY SHOT AND EDITED SHORT FILM ABOUT ME AND MY PERFORMANCES! (Shot March 2011) Using humor and a love of fantasy, "The Amazing Amy" Harlib connects with audiences through performing strenuous yoga-based contortion acts in New York City. See the project at http://mediastorm.com/training/the-amazing-amy Participating in this documentary was one of the best experiences of my life! I hope I get gigs from it but even if I don't, I'll have memories and a record of my work I can treasure forever. THANKS SO MUCH! Amazing Amy appears on TV on Discovery's Science Channel 'Oddities' Program Season 2: The Horaffe, third segment. See it here! http://science.discovery.com/videos/oddities-the-horaffe-videos/ The Amazing Amy (Harlib) is 56 years old and proud of showing what she can do despite her age. She has spent a life time studying all forms of movement and physical theater and became attracted to Chinese martial arts, acrobatics and Yoga in the early 1980s and parlayed that into a solo performance career that took her to Taiwan and back to her native NYC environs to perform in a wide variety of venues until 1994 when injuries forced her to retire with a disintegrated disc in her spine, torn rotator cuffs in both shoulders and arthritis that necessitated a total left hip replacement in 1998. All that time Amy never stopped her Yoga and so hated not performing, that she's using her extreme flexibility and zany imagination to relaunch her career starting in Mar. 2009! Already The Amazing Amy has appeared at the Downtown Clown Revue, The Bindlestiff Family Circus Open Variety Show at the Galapagos Arts Space, The Lava Dance Co. Night of Renegades Variety Show, the Hi Christina Arts Space, the Ruby Streak Trapeze Studio's Velveteen Rainbow Showcase, Cirque Off! at Triskelion Arts Space, Williamsburg, Brooklyn, The House of Yes, Williamsburg, Brooklyn, and The Gong Show Live! at B. B. King's, NYC! The Amazing Amy's Yoga Odyssey was part of the ensemble show Flight 18 running Thurs.-Sun. from Mar. 6 - April 4th at the South Street Seaport. http://www.flight18.net/ http://www.tribecatrib.com/news/2010/april/566_flight-18-lifts-off.html Amazing Amy is the ONLY Contortionist in the world who has created Yoga Dance acts with special themes and characters and offers a large repertoire (all acts run approx. 6-7 minutes in length). Amazing Amy loves SF & F in all media and frequently uses genre themes in her performances.