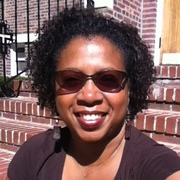 Carol has been known to work on several projects at once, but writing has always remained to be a constant passion. Everything and anything that she encounters can inspire a tale of Fantasy, Horror or Suspense and she’s on a mission to share these tales with anyone who’ll take the time to read them. As a native of Brooklyn, New York, some of her tales involve her old neighborhoods while some take place in the unexplored imaginary terrortories of her “Writer’s Realm”. Don’t let the smile fool you. Behind those pearly whites lies an obsession with things that lurk in the dark; a desire to explore beyond the reach of the light’s glow and poke at what sits in the corner…waiting. Carol is one of three authors who contributed material to their first self-published book “Corner Stories”, which made its debut in October 2011. Currently, Carol is writing short stories for publication within the “Dark Secrets” project, working on a second anthology of original horror short stories and is also writing her first full novel. Two of her stories, “Rubber Ducky” and “Peace of Mind”, can be found on the Short Story Me website in the Horror section. Horror and Suspense stories are not the only genre that Carol likes to work in; she also writes poems and lyrics. You can find one of her poems posted as a guest blogger on B. J. Neblett’s poetry blog, “Here For A Season”. Look for her latest story "The Wood Carver's Knife" to appear in the December 2014 issue of eFiction's "Under the Bed" magazine.