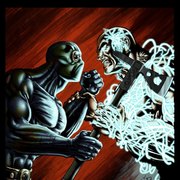 Deonte Hollomon is an up and coming african american fiction writer. With his hands thoughouly planted in screenwriting, Deonte has now decided to venture into the world of comics. Deonte is a military brat and is the son of Gary and Pauline Hollomon. His upbringing took him from the beautiful shores of Crete Greece to the speed of the autobahn in germay, and his imagination is as wide as his travels. Two years aga Deonte started a small underground comic startup that has quickly grown into an organism of its own. Getting ready to release his first graphic novel "orion" or O is sure to turn some heads in the comic realm. So keep yours eyes and mind open and be prepared to be taken into a new era of imagination!