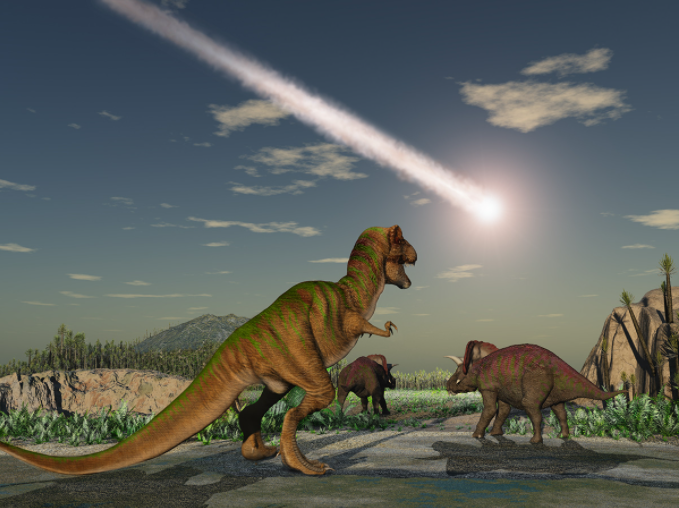 Luis Walter Alvarez co-developed the theory that the extinction of the dinosaurs was caused by an asteroid impact (Courtesy: iStock/estt)

In the run-up to the announcement of the 2021 Nobel Prize for Physics on 5 October, we’re running a series of blog posts looking at previous recipients and what they did after their Nobel-prize-winning work. In this first installment, Laura Hiscott explores the wide-ranging research of Luis Walter Alvarez, who won the prize for developing the hydrogen bubble chamber, but also investigated the Egyptian pyramids and dinosaur extinction.

I don’t remember the first time I heard the theory that the dinosaurs were wiped out by an asteroid crashing into the Earth. It’s a dramatic story that gets told to wide-eyed children in classrooms and natural history museums at an earlier age than many can remember, so it feels more like absorbed knowledge. What is less commonly known, however, is that one of the originators of this proposal was Luis Walter Alvarez, who won the 1968 Nobel Prize for Physics for his work on the hydrogen bubble chamber.

But it wasn’t just dinosaurs and asteroids that Alvarez got excited about. Throughout his long and varied career, Alvarez was also involved in sending particle detectors into the sky in high-altitude balloons and searching for hidden chambers inside ancient Egyptian pyramids. It appears that his innate curiosity and experimental creativity, which were so vital for winning the Nobel prize, also led him to investigate many more questions both within physics and beyond.

Life beyond the Nobel: how Luis Alvarez deduced the disappearance of the dinosaurs, Laura Hiscott, Physics World