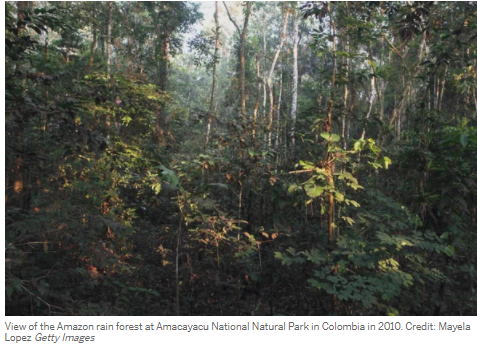 Note: Working on two reviews, and my research proposal. It's a very busy writing semester.

Dinosaur and fossil aficionados are intimately familiar with the meteorite strike that drove Tyrannosaurus rex and all nonavian dinosaurs to extinction around 66 million years ago. But it is often overlooked that the impact also wiped out entire ecosystems. A new study shows how those casualties, in turn, led to another particularly profound evolutionary outcome: the emergence of the Amazon rain forest of South America, the most spectacularly diverse environment on the planet. Yet the Amazon’s bounty of tropical species and habitats now face their own existential threat because of unprecedented destruction from human activity, including land clearing for agriculture.

The new study, published on Thursday in Science, analyzed tens of thousands of plant fossils and represents “a fundamental advance in knowledge,” says Peter Wilf, a geoscientist at Pennsylvania State University, who was not involved in the research. “The authors demonstrate that the dinosaur extinction was also a massive reset event for neotropical ecosystems, putting their evolution on an entirely new path leading directly to the extraordinary, diverse, spectacular, and gravely threatened rain forests in the region today.&rdquo;

These insights, Wilf adds, “provide new impetus for the conservation of the living evolutionary heritage in the tropics that supports human life, along with millions of living species.”