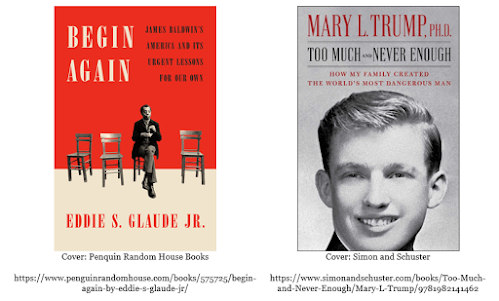 We have always held to the hope, the belief, the conviction that there is a better life, a better world, beyond the horizon. Franklin D. Roosevelt

At 1 pm eastern, 12 noon in San Antonio, my wife's family laid her favorite uncle to rest, a U.S. veteran. He died due to health complications, non-COVID. Because of the pandemic, we had to say our tearful goodbyes over Facebook live, the participants' voices muffled by masks singing "It is Well." He lived a good life, into his eighties, longer than my own father, but his sons probably don't take solace in his longevity: their hero is gone for now.

Dr. Eddie Glaude, Jr's book on James Baldwin downloaded on my Kindle about a week before Dr. Mary Trump's book about her uncle. They are my mental comfort food between writing a research proposal: a book written by an African American heterosexual professor about an LGBT Civil Rights icon, and a book about an unstable, reckless sociopath, written by his niece, a Lesbian, a notion now in a world with Ellen DeGeneres and Rachel Maddow is almost cliche. "Jimmy" was out and proud before it was relatively safe, or sane. He literally could have been killed for "the color of his skin, and the content of his character." But that did not stop or stifle his boldness.

“I love America more than any other country in the world and, exactly for this reason, I insist on the right to criticize her perpetually.” ― James Baldwin

We are "betwixt and between" the past and the future: one written and one yet-to-be written, first by John Lewis and now, Black Lives Matter et al. We are betwixt and between love and hate, democracy and fascism; working towards a more perfect union, and barreling towards totalitarianism. The philosophies of Hitler, Goebbels and Himmler are personified in Bannon, Gorka and Miller, fascist whisperers recycling hate in the 21st century: the ovens now microscopic, efficient, utterly malevolent, and unseen. We are seeing the NRA's "jackbooted thugs" deployed in American cities - Portland, Oregon, soon Chicago, Illinois; our nation's birthplace in Philadelphia, Pennsylvania and any other blue-governed city, without a peep from them, as deafening a silence now as for the death-by-police of the licensed gun owner, Philando Castile. The second amendment might be outlawed to Melanin in a dictatorship.

The best political weapon is the weapon of terror. Cruelty commands respect. Men may hate us. But, we don't ask for their love; only for their fear. Heinrich Himmler, commander of the German Schutzstaffel (SS) and Gestapo.

“We are now faced with the fact that tomorrow is today. We are confronted with the fierce urgency of now. In this unfolding conundrum of life and history, there "is" such a thing as being too late. This is no time for apathy or complacency. This is a time for vigorous and positive action.” ― Martin Luther King Jr.

For Dr. Eddie Glaude, Jr., that fierce urgency is he, I and previously "Jimmy" living in these black bodies, witnessing the country careen from "hope and change" to this dark moment of running over civil rights demonstrators in Charlottesville, Nazis in polo shirts carrying tiki torches; or teargassing peaceful George Floyd demonstrators on the Washington Mall. Once we got over the "post-racial America" shtick, it didn't take long to see the new black president hung in effigy, called the n-word almost daily, burned at the stake, bone through the nose as witch doctor for the pejorative: Obamacare. They prayed Psalm 109:8-15, for his death and desolation. They are anti-Christians for an Antichrist. Their hatred of immigrants in chat rooms and over the pit of hell summoned eventually a demon, who recycled for them Hitler, the Klan and Reagan's slogan: make America great again. Exposed in Dr. Glaude's treatise was what Eddie and "Jimmy" referred to as the American lie, broadcast with the hubris of a birther foghorn.

For Dr. Mary Trump, that fierce urgency was living through a slow train wreck: watching her father, Freddy - Fred Trump's namesake - taken apart by her grandfather brick-by-brick until there was nothing left. She could still live in the comfort of privilege, station and American aristocracy: her bloodline leading directly to the seat of power almost infinite. All she had to do was keep her head low and flatter a narcissist. Her clinical training tells her there is no pleasing such a person. His needs are a bottomless pit next to a black hole. His loyalty is demanded of others and expendable to the same. Just as the senior sociopath dismantled her father, her training said a prolific lying, mentally disturbed, gaslighting and violent man could dismantle a nation.

Mary L. Trump, Too Much and Never Enough: How My Family Created the World’s Most Dangerous Man

Perhaps she thought of Martin Niemöller:

First they came for the socialists, and I did not speak out—because I was not a socialist.

Then they came for the Jews, and I did not speak out—because I was not a Jew.

Then they came for me—and there was no one left to speak for me.

It is easy to fill in the blank now: African Americans, Hispanics/Latinos, Women, Homosexuals, Lesbians, Transgenders: if we do not speak for our fellow humans, we follow them into the COVID ovens. A pandemic as eugenics is far more efficient, less visible and more excusable than public crematoriums.

I still have hope. I have to. I have a granddaughter barely over a year old, and she DESERVES a future.

Politics in America especially is organized tribalism. The factions George Washington warned about in his farewell address express themselves as republicans and democrats, along with greens and independents.

We are all between yesterday and tomorrow, living out our hyphens. We are ever all in "the fierce urgency of NOW" for tomorrow. We all have children, or know children, and a world that looks like a dystopian novel is only appealing to sociopaths, mass murderers and death cult members. A world like that has few children, and the human species - Coronavirus, climate change, or nuclear exchange - is then in peril.

For this election, for humanity, we have to ALL be Americans, and heroes in the spirit of John Lewis: voting by mail, voting early, getting in "good trouble" for this fleeting, precious thing called democracy: made real by the struggles of the downtrodden and "the least of these." For "the fierce urgency of now," for a "better world beyond the horizon"... for tomorrow.

“never lose sight, as we finger the pain and disillusionment of our after times, of the possibility of a New Jerusalem.” ― Eddie S. Glaude Jr., Begin Again: James Baldwin's America and Its Urgent Lessons for Our Own