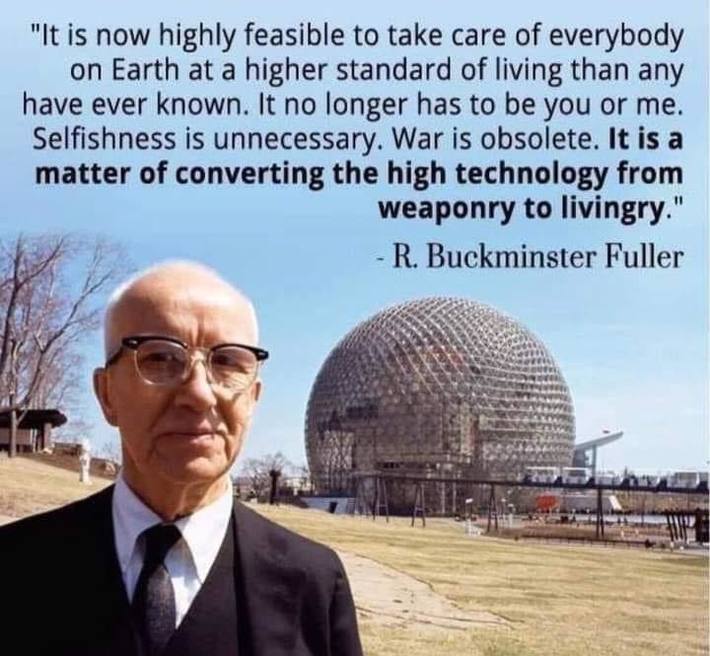 “We should do away with the absolutely specious notion that everybody has to earn a living. It is a fact today that one in ten thousand of us can make a technological breakthrough capable of supporting all the rest. The youth of today are absolutely right in recognizing this nonsense of earning a living. We keep inventing jobs because of this false idea that everybody has to be employed at some kind of drudgery because according to Malthusian Darwinian theory he must justify his right to exist. So we have inspectors of inspectors and people making instruments for inspectors to inspect inspectors. The true business of people should be to go back to school and think about whatever it was they were thinking about before somebody came along and told them they had to earn a living.”

What do borders do, mean, and look like in different parts of the world? How are they decided? Who or what might they protect? How might they do harm? How and why might they change?

Countries protect their borders for several reasons. This is especially true in areas where two or more countries have fought over the same land. Cambodia and Thailand are countries in Southeast Asia. They have disputed the territory of the Preah Vihear Temple for more than a century.

Sometimes, borders keep citizens from leaving a country. Nations like North Korea, Myanmar, and Cuba rarely allow their residents to cross their borders.

Many border disputes happen when people fight over natural resources. Natural resources are anything a person can use that comes from the natural environment. The countries of Sudan and Egypt have argued for years over a region called Hala'ib. Hala'ib is rich in the mineral manganese, a natural resource. Manganese is important for making iron and steel.

Border problems often come up when people from other regions take over an area and create borders. During the 1800s and 1900s, European countries colonized much of Africa. In other words, outsiders from Europe moved into Africa. They took control of the people there. They took the land as their own. European colonists created the borders of most African countries. However, the borders they made often did not always consider the different groups living in an area.

Excerpts from "Overview: What Are Borders?" Facing History

The Corporation is a 2003 Canadian documentary film written by University of British Columbia law professor Joel Bakan, and directed by Mark Achbar and Jennifer Abbott. The documentary examines the modern-day corporation. Bakan wrote the book, The Corporation: The Pathological Pursuit of Profit and Power, during the filming of the documentary.

A sequel film, The New Corporation: The Unfortunately Necessary Sequel, was released in 2020.

The documentary shows the development of the contemporary business corporation, from a legal entity that originated as a government-chartered institution meant to affect specific public functions to the rise of the modern commercial institution entitled to most of the legal rights of a person. The documentary concentrates mostly upon corporations in North America, especially in the United States. One theme is its assessment of corporations as persons, as a result of an 1886 case in the Supreme Court of the United States in which a statement by Chief Justice Morrison Waite led to corporations as "persons" having the same rights as human beings, based on the Fourteenth Amendment to the United States Constitution.

In a Google Internet search on "the mythology of race," a book that's in my library is in the upper right-hand corner of my search page: "'The Myth of Race: The Troubling Persistence of an Unscientific Idea' is a book by anthropologist Robert Wald Sussman arguing that race is not, and never has been, a valid biological category in humans." As humans migrated out of Africa, they landed in places that didn't have the direct UV light of the equatorial sun. Lack of sunlight, eating or discovering foods native to their new lands, humans like any other animal adapted, and changed appearances with respect to their environments. In Europe, they didn't require Melanin, their hair straightened in the harsh arctic winters. Over time, all they saw was "them," and as long as everyone looked the same, the only thing that spurred conflict was covetousness: property, livestock, attractive lovers, and wives. Once trinkets, bobbles, and currency replaced barter, that encouraged hoarding, and comparisons between neighbors: who has the most "stuff?" As men explored other parts of the globe and found "them" and their stuff, there had to be a justification for taking their stuff as their own, for "some" having most, and "others" having the least. We are at the tipping point in the struggle to maintain three legal fictions: borders, corporations, and racial categories.

Ubuntu (Zulu pronunciation: [ùɓúntʼù]) is a Nguni Bantu term meaning "humanity". It is sometimes translated as "I am because we are" (also "I am because you are"), or "humanity towards others" (in Zulu, umuntu ngumuntu ngabantu). Wikipedia

The aforementioned legal fictions are stifling our development as a species, but enriching the fat pockets of toxic, pathological families that consider themselves royalty, and worthy of worship (and have personality cults to do just that). At our current juncture, world government - genuine cooperation - is laughable. The conned danger of "others" makes us reinforce our borders, erect our walls, intern refugees in Libya, violating human rights with impunity. If there are any vaccines, the so-called First World Nations will receive the jabs first. Our performance during a pandemic has been pitiful. COP26 was whiter than the Oscars due to southern hemisphere nations (i.e., brown people) didn't receive the mRNA vaccines to ARGUE [about] that northern hemisphere nations (i.e., white folks) received first. So for safety reasons, browner nations were placed in political Zoom purgatory as the climate change can is kicked down the road.

The feckless mismanagement of Chief Justice John Roberts over his five radical brethren practically sealed the fate of the former Supreme Court: irrelevance. "Stare decisis is Latin for 'to stand by things decided.' In short, it is the doctrine of precedent. Courts cite stare decisis when an issue has been previously brought to the court and a ruling has already been issued. … Horizontal stare decisis refers to a court adhering to its own precedent" Cornel Law. If Roe v. Wade is overturned, there is no such thing as precedent. Expect same-sex marriage to fall next. After that, voting rights for African Americans, then all women's rights RBG fought for. Avalanches begin with a single snowflake. On the calendar, we barrel to the future; legally we'd be pre-Brown.

Oh, and the "gang of Putin" is chomping at the bit for another government shutdown, because Saint Ronnie saying "government is the problem" started a party grift that hasn't abated in 41 years, managing to "trickle-down" zero dividends, but trickle-up tax cuts without fail. They'd rather do important things like reading Dr. Suess in the well of the Senate or having Twitter battles with Big Bird.

Fear of the Antichrist - a malevolent narcissistic psychopath in a man suit - and the bloodlust for Armageddon fuels our current lunacy. It will not be benevolent aliens, a United Federation of Planets, superluminal space drives, or Heisenberg-defying matter re-sequencers that will spur the elimination of class struggle (and money, apparently). It will be global cooperation heretofore unseen.

Such a world revolves around Ubuntu. We sadly seem bereft of its precepts.

Since it begins with "u" it must be associated with utopia: "nowhere place."