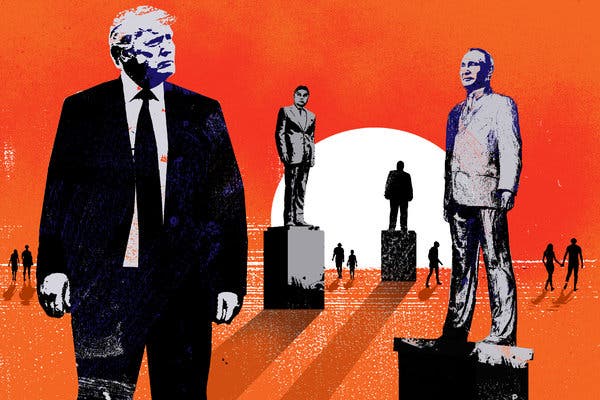 First we see the face. The face of America’s Donald Trump, or Hungary’s Viktor Orban, or Russia’s Vladimir Putin, or Turkey’s Recep Tayyip Erdogan, the face of men who wish to transform democracies into personality cults.

The face is the oldest mark of leadership, the mark that works for clan or tribe. If we see only the face, we are not thinking about policies or politics; instead, we are accepting the new regime and its rules. However, a democracy is about the people, not a single mythicized person.

People need truth, which a cult of personality destroys. Theories of democracy, from the ancient Greeks through the Enlightenment to today, take for granted that the world around us yields to understanding. We pursue the facts alongside our fellow citizens. But in a cult of personality, truth is replaced by belief, and we believe what the leader wishes us to believe. The face replaces the mind.

The transition from democracy to personality cult begins with a leader who is willing to lie all the time, in order to discredit the truth as such. The transition is complete when people can no longer distinguish between truth and feeling.

Yesterday, a demagogue spoke to a former political party that for the first time in its history, doesn’t have a platform.

Remove “R” and “D.” What are national conventions, other than platforms, or means, to lay out the vision of the standard-bearer for the country, and thus the party itself? To give a compelling reason to vote for a party’s vision, or colloquially, “what’s in it for me?” The chaos candidate who became the chaos president foamed at the mouth at a super spreader event breaking the Hatch Act on the White House lawn made no improvement – in FOUR YEARS – on my observations years ago, posted September 1, 2016: Party of Apocalypse.

The first night of the RNC convention could have been a success with the noted exception of Melania Trump lifting whole cloth parts of now First Lady Michelle Obama’s speech to the DNC convention in 2008. An out-of-work journalist was the first to catch and tweet it (a sad indictment of the employed journalists ACTUALLY at the RNC convention) [1]. The last night of the RNC was like “The Dark Knight Returns”: the world was essentially a shit show like Gotham, and Batman screamed for 75 minutes incoherent, semi-form, hand-tossed Word Salad anointing himself Bruce-Wayne-Almighty-Cheetos-Jesus savior of the planet by the strength of his will alone (no cool gadgets – just a Galaxy Smart Phone and a twitter handle he misspells as he jacks off on almost daily). The Bat’s bravery was previously demonstrated during his selfless sacrificed Vietnam five deferments to let others more worthy die in his place.

My coworkers on the first night’s events had statements like: “that is not plagiarism” (it was); or “what she said (Mrs. Trump) in her speech most people say in one form or another every day!” 38 hours later: a phantom ghostwriter emerged – Meredith Melver, who apparently conveniently works for a man that’s on record imitating his own publicist. [2] The name sounds suspicious enough with the possibility of two plagiarisms vis-à-vis Mrs. Trump and his educational ventures. Trump Institute and University lifted content whole cloth [3]. There are suspicions like his publicist, Ms. Melver may have been a convenient creation, but it seems she’s legit [4]. But more importantly, the Meredith mea culpa was enough for my coworker Trumpism fans. Never mind Mrs. Trump had previously revealed to Matt Lauer of NBC she had “written it all herself.” They pivoted to the next talking point with the ease of any group studied by Leon Festinger.

Don’t know this guy? He studied an apocalyptic UFO cult in the 1950s – a precursor to the Heaven’s Gate Cult of the 1990s. They were ABSOLUTELY sure the world would end and had a date. The faithful sold all their worldly goods and waited for the apocalypse…and waited…and waited… Some of the former faithful felt discouraged and left. Others felt their “vibrations” had saved the Earth from destruction. [5] Simple Psychology defines it thus: “Cognitive dissonance refers to a situation involving conflicting attitudes, beliefs or behaviors. This produces a feeling of discomfort leading to an alteration in one of the attitudes, beliefs, or behaviors to reduce the discomfort and restore balance, etc. “For example, when people smoke (behavior) and they know that smoking causes cancer (cognition). “Festinger’s (1957) cognitive dissonance theory suggests that we have an inner drive to hold all our attitudes and beliefs in harmony and avoid disharmony (or dissonance).”</em>

This is a full-blown cult of personality.

A cult of personality or cult of the leader,[1] arises when a country’s regime – or, more rarely, an individual – uses the techniques of mass media, propaganda, the big lie, spectacle, the arts, patriotism, and government-organized demonstrations and rallies to create an idealized, heroic, and worshipful image of a leader, often through unquestioning flattery and praise. A cult of personality is similar to apotheosis, except that it is established by modern social engineering techniques, usually by the state or the party in one-party states and dominant-party states. It is often seen in totalitarian or authoritarian countries.

The term came to prominence in 1956, in Nikita Khrushchev‘s secret speech On the Cult of Personality and Its Consequences, given on the final day of the 20th Congress of the Communist Party of the Soviet Union. In the speech, Khrushchev, who was the First Secretary of the Communist Party – in effect, the leader of the country – criticized the lionization and idealization of Joseph Stalin, and by implication, his Communist contemporary Mao Zedong, as being contrary to Marxist doctrine. The speech was later made public and was part of the “de-Stalinization” process in the Soviet Union. Wikipedia

Making political speeches from the White House lawn is as illegal as making political speeches as Secretary of State from Jerusalem. They are violations of the Hatch Act, which prohibits such actions. If this treatment of The Constitution like toilet paper is going on in plain sight, what happens when American becomes a failed state?

WHICH Amendment will matter, or be reinforced? Forget birthright citizenship: you are citizen if the KING says you’re a citizen. Forget voting rights for African Americans, or women, or their autonomy over their own bodies. Mashing up George Carlin and Margaret Atwood, I can see a dystopian scenario where women become “broodmares of the state” for people screaming about “white genocide,” doing much meth and little coitus. I can think a party, afraid of losing political power to demographics, could easily make the case the 2nd Amendment restricted to citizens with a LACKING preponderance of Melanin. In Putin’s Russia, there is no such thing as a 2nd Amendment, or a preponderance of Melanin, for that matter.

My “Party of Apocalypse” essay has, unfortunately, aged well.