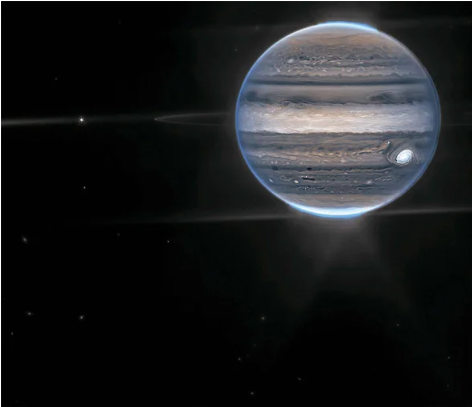 Jupiter's rings, its moons Amalthea (the bright point at left), Adrastea (the faint dot at the left tip of rings), and even background galaxies are visible in this image from JWST's NIRCam instrument. Whiter areas on the planet represent regions with more cloud cover, which reflects sunlight, especially Jupiter's famous Great Red Spot; darker spots have fewer clouds. Perhaps the most stunning feature is the blue glow of the planet's auroras at the north and south poles. This light shows results when high-energy particles streaming off the sun hit atoms in Jupiter's atmosphere. Auroras are found on any planet with an atmosphere and a magnetic field, which steers the sun's particles to the poles; besides Earth and Jupiter, telescopes have seen auroras on Saturn, Uranus, and Neptune.