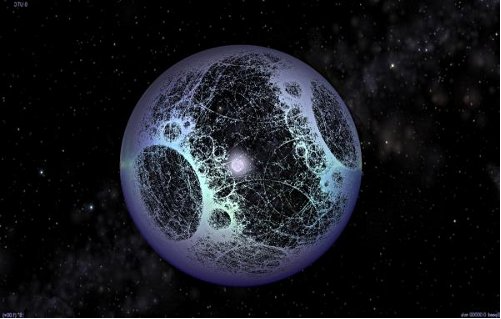 Although the so-called Dysonian SETI has been much in the air in recent times, its origins date back to the birth of SETI itself. It was in 1960 – the same year that Frank Drake used the National Radio Astronomy Observatory in Green Bank, West Virginia to study Epsilon Eridani and Tau Ceti – that Freeman Dyson proposed the Dyson sphere. In fiction, Olaf Stapledon had considered such structures in his novel Star Maker in 1937. As Macy Huston and Jason Wright (both at Penn State) remind us in a recent paper, Dyson’s idea of energy-gathering structures around an entire star evolved toward numerous satellites around the star rather than a (likely unstable) single spherical shell.

We can’t put the brakes on what a highly advanced technological civilization might do, so both solid sphere and ‘swarm’ models can be searched for, and indeed have been, for in SETI terms we’re looking for infrared waste heat. And if we stick with Dyson (often a good idea!), we would be looking for structures orbiting in a zone where temperatures would range in the 200-300 K range, which translates into searching at about 10 microns, the wavelength of choice. But Huston and Wright introduce a new factor, the irradiation from the interior of the sphere onto the surface of the star.

This is intriguing because it extends our notions of Dyson spheres well beyond the habitable zone as we consider just what an advanced civilization might do with them. It also offers up the possibility of new observables. So just how does such a Dyson sphere return light back to a star, affecting its structure and evolution? If we can determine that, we will have a better way to predict these potential observables. As we adjust the variables in the model, we can also ponder the purposes of such engineering.

Think of irradiation as Dyson shell ‘feedback.’ We immediately run into the interesting fact that adding energy to a star causes it to expand and cool. The authors explain this by noting that total stellar energy is a sum of thermal and gravitational energies. Let’s go straight to the paper on this. In the clip below, E* refers to the star’s total energy, with Etherm being thermal energy:

When energy is added to a star (E∗ increases), gravitational energy increases and thermal energy decreases, so we see the star expand and cool both overall (because Etherm is lower) and on its surface (because being larger at the same or a lower luminosity its effective temperature must drop). A larger star should also result in less pressure on a cooler core, so we also expect its luminosity to decrease.