Center for Disease Control: Coronavirus Disease (COVID-19)
I am admittedly drained by circumstances outside of my control and workload.
Pursuing a Ph.D. in practically ANYTHING is exhausting enough. Papers are assigned. No time is allotted to complete any assigned task. There's the research proposal. There's lab work if you're in a STEM field and writing...LOTS of writing.
It's been a week. The Stock Market ate my retirement. To quote a classmate, "the world is on fire, and I'm watching it burn." I feel like I've entered a near four-year dystopian nightmare that I cannot wake from. He's done this much damage...in a week.
Next week: all seventeen North Carolina colleges and universities will go to virtual classes. A lot of lecture is interpretive art: professors tend to "riff," not that they don't know their subjects, but at certain levels, they're not going to spoon feed you. You HAVE to attend classes, you must rewrite notes, read the text and memorize every detail preparing for quizzes or exams.
It's going to be interesting trying to do this online. We're online for an indefinite time.
March madness has ended abruptly due to Coronavirus.
The NBA, NFL and Major League Baseball have suspended seasons. Might as well look for the possible cancellation the Olympics this summer. What about football in the fall? Coronavirus will lull in the hotter spring and summer months, but being here it will likely rage back-to-form as the seasons change.
The market dropped 10% - about what it did in 1987 during that recession, but it was never driven by a narcissistic, incompetent boob either high on Adderall, cocaine or an aggressive, infectious virus.

The origin of tips is an acronym: "to insure promptitude" (old English). It was a term the aristocracy used for servants, particularly in restaurants.

Most of our restaurant servers are in the visible gig economy, and make LESS than the minimum wage of $7.25/hour. They make about $2 per hour and the rest in tips, which to make it worth it, means 20% and busing a lot of tables, laborious, backbreaking work with no vacation, overtime or paid sick days. 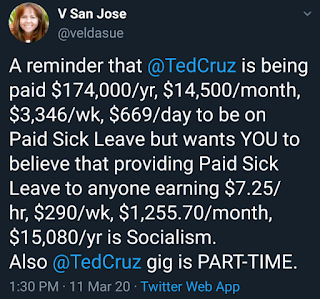 It also means if you're sick, you can't work and therefore you can't pay your bills, or you know: eat. Maybe, you muscle through it with daytime cold medicine - a lot of it and cough drops. Maybe you blow your nose ferociously between waiting tables and hope no one notices while you infect them.
Lamar Alexander objected to two weeks of paid sick leave, which isn't even as generous as other countries, nor that of his colleagues. Somehow we lost paid sick leave and it left with a whimper. I had six weeks in the nineties working at Motorola and AMD. You used it when you needed it; it rolled over to the next year. Now, American companies have employees take vacation, thus penalizing the employee for something out of their control. You CAN take unpaid sick leave if you run out of vacation. It sounds like the upper levels never get sick, or at their levels probably have the sick leave they've stolen from everyone else.
Paid sick leave allows us to "flatten the curve": people can stay home, not infect others and pay their bills. Companies get healthy employees back that won't get others sick, or shutdown their businesses. It relieves the strain on the medical system, that is about to get slammed if nothing changes.
Grad students are studying to be professionals, and they like their instructors can telecommute...gig professionals cannot.
"My goal is to cut government in half in twenty-five years, to get it down to the size where we can drown it in the bathtub." Grover Norquist

Norquist had a tax pledge:

I, ______, pledge to the taxpayers of the ______ district of the state of ______ and to the American people that I will: One, oppose any and all efforts to increase the marginal income tax rates for individuals and/or businesses; and Two, to oppose any net reduction or elimination of deductions and credits, unless matched dollar for dollar by further reducing tax rates
The taxpayers Grover and the criminal-element-masquerading-as-a-political-party is honoring are at a little higher pay grade than the rest of us. Decades of not paying for shit resulted in crumbling infrastructure the "invisible hand" of the market never repaired, it resulted in drowning the baby in the bathwater by cutting essential services like disaster preparedness for pandemics out of spite for your predecessor.
It's really dogma and cult-like in their slavish devotion to this creed. "Cutting to grow" the economy has never and I repeat: NEVER trickled down to anyone! Instead of Reaganomics, it should correctly be called "Laffernomics." It's a con job that's been siphoning funds up the ladder into the canopy of the 1% for four decades now. When the 99% ask questions, they push conspiracy theories and racist tropes so we can tear at each other. It's worked for them since the Civil War, and ensured their hegemony. Their oligarchy is more blatant now, and we're exhausted by their relentless propaganda.
The gig economy is the result of globalization and moving manufacturing via trade agreements overseas. It looks good on paper and saves a lot of money for companies. Sadly, the factory off-shored moves support jobs out of a nation, state, and municipality: plumbers, painters, janitors and cooks; nurses and daycare workers for on-site offered care. People who tried college, or knew they weren't "college material" (whatever that means), but could make a decent living and raise a family in jobs of worth and dignity. China, Korea (the masters of drive-by testing) and Taiwan will recover from Coronavirus: after quarantine of their populations - they'll just turn on the factories that used to be here. Their plumbers, painters, janitors and cooks will report for duty.
Having gig economies means Uber drivers trying to make a buck will unwittingly spread the virus to every customer they pick up, the waiter will breath on the restaurant client; the usher at church will pass it with the collection plate and Eucharist sacraments.
Humans work by cooperation and collective activity. Everything from sporting events to Broadway shows, worship services, weddings and funerals will have to be rethought. People will start ordering groceries online. As schools close, children already dependent on at least one meal there will be driven into food insecurity and the nation into developing world status. We will be further atomized and stratified, further isolated from one another. How exactly under such circumstances can we vote this nightmare out? I often wonder if this chaos is ineptitude, or nefarious.
"United States" is already oxymoron and an inside joke to authoritarian dictators.
I'll take off Monday, but the blog should go up at its usual time. My commute to school has suddenly been reduced.
Tags: civics, civil_rights, existentialism, fascism, human_rights, politics
E-mail me when people leave their comments –
Follow