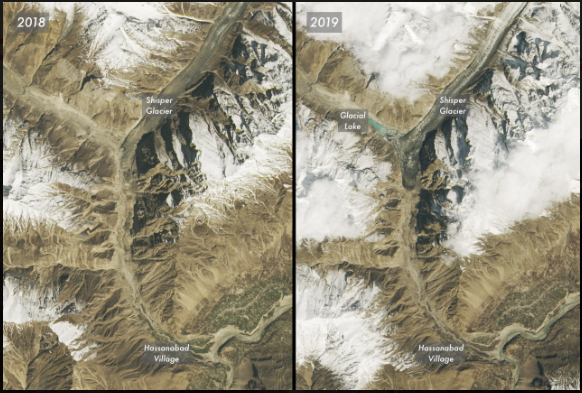 The Shisper Glacier in April 2018, left, and April 2019, right. The surging ice blocked a river fed by a nearby glacier, forming a new lake. YALE ENVIRONMENT 360 / NASA

Everything about Earth and the organization of human civilization is about the control of resources.

We’ve come up with arbitrary “rules” about who is worthy of those resources, and how much they can horde, or obtain. Pharaohs, priests, secret societies, and guilds all have “knowledge” they jealously guard, or it may be as simple as caste or color. Every society with billionaires, emperors, kings, oligarchs, potentates, and sheiks all have a designated group to blame for the ills of poor planning and sadistic resource management: indigenous, or imported servants by force, they are the easy go-to designated pariahs. It is a cynical way to get rich, but a poor method of species survival. A resource we all need, from billionaires to pariahs, is potable water to drink. Jackson, Mississippi is a foreshadowing of what we might expect.

The permafrost is melting, and that will release viruses that haven't seen the light of day for several millennia, and we have no vaccines for what will likely be carried on the wind and zoonotically transferred between animals and humans.

Starships are as real as magic carpets, genies, Yetis, and mermaids.

There is no “planet B,” life, or wealth on a nonfunctional planet.

Warmer air is thinning most of the vast mountain range’s glaciers, known as the Third Pole because they contain so much ice. The melting could have far-reaching consequences for flood risk and for water security for a billion people who rely on meltwater for their survival.

Spring came early this year in the high mountains of Gilgit-Baltistan, a remote border region of Pakistan. Record temperatures in March and April hastened melting of the Shisper Glacier, creating a lake that swelled and, on May 7, burst through an ice dam. A torrent of water and debris flooded the valley below, damaging fields and houses, wrecking two power plants and washing away parts of the highway and a bridge connecting Pakistan and China.

Pakistan’s climate change minister, Sherry Rehman, tweeted videos of the destruction and highlighted the vulnerability of a region with the largest number of glaciers outside the Earth’s poles. Why were these glaciers losing mass so quickly? Rehman put it succinctly. “High global temperatures,” she said.

Just over a decade, ago, relatively little was known about glaciers in the Hindu Kush Himalayas, the vast ice mountains that run across Central and South Asia, from Afghanistan in the west to Myanmar in the east. But a step-up in research in the past 10 years — spurred in part by an embarrassing error in the Intergovernmental Panel on Climate Change’s 2007 Fourth Assessment Report, which predicted that Himalayan glaciers could melt away by 2035 — has led to enormous strides in understanding.

Scientists now have data on almost every glacier in high-mountain Asia. They know “how these glaciers have changed not only in area but in mass during the last 20 years,” says Tobias Bolch, a glaciologist with the University of St Andrews in Scotland. He adds, “We also know much more about the processes which govern glacial melt. This information will give policymakers some instruments to really plan for the future.”