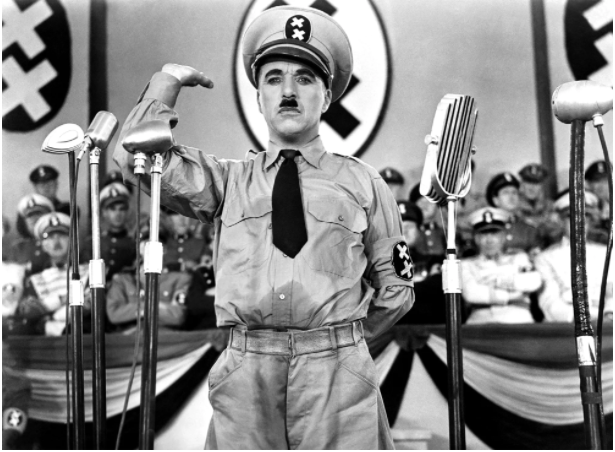 The Great Dictator—Charlie Chaplin’s masterful satire of Adolf Hitler—began filming in September 1939, right at the start of World War II. By the time it was released in 1940, the Axis had been formed, and Nazis were already occupying much of France. The threat was not at all abstract: critic Michael Wood notes that the movie premiered that December, in London, amid German air raids. The following December, of 1941, would yield its own devastating threats from the air—this time on American soil, which would clarify for Americans the realness of this war by bringing it home.

It was, in other words, a strange moment to be making a comedy about Adolf Hitler—even a satire holding him to account, and even one in which Chaplin himself, who was at that point one of the most famous movie stars in the world, famous for playing the ambling, lovable Little Tramp, took on the role of Hitler. In 1940, Germany and the US had yet to become enemies; feathers, it was worried, would be ruffled by a movie like this. But Chaplin was already unwittingly bound up in the era’s iconographies of evil. His likeness, the Little Tramp, with that curt mustache and oddly compact face of his, had already become a visual reference for cartoonists lampooning Hitler in the press. And he was already on the Nazis’ radar: the 1934 Nazi volume The Jews Are Looking At You referred to him as "a disgusting Jewish acrobat." Chaplin wasn’t Jewish. But he was frequently rumored to be. And when he visited Berlin in 1931, he was mobbed by German fans, proving that his popularity could surpass even the growing ideological boundaries of a nascent Nazi Germany—hence their hatred. Vanity Fair

TV producers described how they smoothed out President Donald Trump's rough edges in The Apprentice, helping mold the image that lifted the serially bankrupt businessman to the presidency.

"I don't think any of us could have known what this would become," Katherine Walker, a producer on five seasons of the NBC reality show told The New Yorker for its January 7 edition. "But Donald would not be President had it not been for that show."

The Apprentice was first aired in 2004 and presented Trump as the ultra-successful real estate deal-maker who would choose from a cast of candidates competing for a job in the Trump Organization. Trump's catchphrase on the show was, "You're fired," which he would deliver pointing at that week's unsuccessful candidate.

Editor Jonathan Braun told the publication that Trump would fire contestants on the show on a whim, forcing editors to "reverse engineer" programs to make Trump's decisions seem coherent.

Tom Phillip's opinion piece in Newsweek is probably cathartic, except to the six million Jews who died in concentration camps, along with Gypsies, the LGBT, scientists his incompetent clown show managed to efficiently slaughter.

Mary Caitlyn wrote on her blog, "The Swamp" the fourteen points of fascism as a warning in 2018. Peter Wehner states it quite plainly in The Atlantic: The GOP Is a Grave Threat to American Democracy. Jeet Heer stated this observation in The New Republic in 2016: they are NOT interested in democracy! How many times must the obvious be stated? WTF are cyber ninjas? The only other option in the modern is authoritarian fascism, and a return to a Medieval caste system of lords and serfs, which negates the reason for the American Revolution, or the "democratic experiment." They're enthralled, bedeviled, bewitched by a disgraced, banned-on-social-media-septuagenarian blogger who is days from criminal indictments in several cases, in several states! I breathlessly await the alternative facts spin on fascist QAnon propaganda outlets! Indictments lead to arrest warrants, his "mini-me" Death DeSantis can't block his extradition, and a few toothless wonders armed-to-the-teeth (ironic: they could have invested their money in better dental care) will volunteer to protect Dumbo Gambino in Mar-a-Sicko while he fires up his private jet for the getaway, forgetting the poor rubes putting their lives on the line for his sorry ass. "Winning."

Mr. Chairman, I am against all foreign aid, especially to places like Hawaii and Alaska,” says Senator Fussmussen from the floor of a cartoon Senate in 1962. In the visitors’ gallery, Russian agents Boris Badenov and Natasha Fatale are deciding whether to use their secret “Goof Gas” gun to turn the Congress stupid, as they did to all the rocket scientists and professors in the last episode of “Bullwinkle.”

Another senator wants to raise taxes on everyone under the age of 67. He, of course, is 68. Yet a third stands up to demand, “We’ve got to get the government out of government!” The Pottsylvanian spies decide their weapon is unnecessary: Congress is already ignorant, corrupt, and feckless. (I wonder if this is where Reagan got his zinger and the GQP's raison d'etre?)

Adenoid Hynkel was a spoof of Adolf Hitler by Chaplin. Ronald Reagan went from Bedtime for Bonzo to the Oval Office. Dumbo Gambino went from a spoof of himself as a successful real estate mogul to the cause of mass deaths by negligence, the cheerleader for a modern insurrection against the government he was elected to lead, and the current instigator of a brewing domestic terrorism insurgency that will tear the republic to shreds.

Daniel Ziblatt, a political science professor at Harvard and the co-author of How Democracies Die, told Intelligencer, “I think it’s pretty clear that there was a somewhat serious effort to steal this election. It’s not going to succeed. In that sense, the acute normative crisis has passed. It doesn’t mean our checks and balances have worked.” He pointed to what he described as “a chronic slow-burning problem” within the American electorate, the “radicalization” within the Republican Party. “One can’t have a democracy [in a two-party system] where one of the two parties is not fully committed to democratic norms.” Ziblatt described the current situation as an escalation of constitutional hardball, where political actors “sniff out weakness in constitutional structure,” violating long-standing norms if not technically the law. He pointed to the Trump-led effort in 2020 to have Republican-controlled state legislatures pick their own electors to throw victory to the president, regardless of how their states voted.