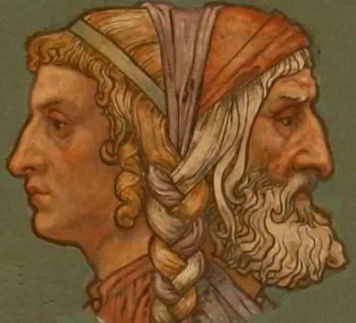 Image Source: Storytelling for Everyone

In Roman mythology, Janus was the god of doors, gates, and transitions. Janus represented the middle ground between both concrete and abstract dualities such as life/death, beginning/end, youth/adulthood, rural/urban, war/peace, and barbarism/civilization.

Source: Anderson Lock Blog (they're apparently locksmiths and historians on the side)

Vladimir Putin’s war of aggression runs on the money Russia gets by selling fossil fuels to Europe. And while Ukraine has, incredibly, repelled Russia’s attempt to seize Kyiv, Putin won’t be definitively stopped until Europe ends its energy dependence.

This means that Germany — whose political and business leaders insist that they can’t do without Russian natural gas, even though many of its own economists disagree — has in effect become Putin’s prime enabler. This is shameful; it is also incredibly hypocritical given recent German history.

The background: Germany has been warned for decades about the risks of becoming dependent on Russian gas. But its leaders focused on the short-run benefits of cheap energy and ignored those warnings. On the eve of the Ukraine war, 55 percent of German gas came from Russia.

There’s no question that quickly cutting off, or even greatly reducing, this gas flow would be painful. But multiple economic analyses — from the Brussels-based Bruegel Institute, the International Energy Agency, and ECONtribute, a think tank sponsored by the Universities of Bonn and Cologne — have found that the effects of drastically reducing gas imports from Russia would be far from catastrophic to Germany.

Humans are the only obstacle to enacting renewable energy, and it is because of the secular gods we worship.

The European term "oligarch" has come into vogue because of Russia's war crimes in Ukraine. "Oligarchy: a government in which a small group exercises control especially for corrupt and selfish purposes," Merriam-Webster. The Austin Chronicle wrote a prescient piece in 2010: "Letters at 3 AM: 'O' is for Oligarchy," and the 2014 essay by professors Martin Gilens and Benjamin I. Page: "Testing Theories of American Politics: Elites, Interest Groups, and Average Citizens" (Cambridge University Press). The end of the abstract:

In what follows, we briefly review the four theoretical traditions that form the framework for our analyses and highlight some of the most prominent empirical research associated with each. We then describe our data and measures and present our results. We conclude by discussing the implications of our work for understanding American democracy and by identifying some of the directions for future research that our findings suggest.

Neither 2010 nor 2014 targeted Russian oligarchs. Our versions are called billionaires.

The term billionaire refers to an individual with assets or a net worth of at least one billion currency units in their native currency such as dollars, euros, or pounds. Billionaires are extremely rich, with assets ranging from cash and cash equivalents to real estate, as well as business and personal property.

Subtracting liabilities from assets results in an individual's net worth. A billionaire's assets generally include things like cash and liquid investments, personal property such as real estate, jewelry, cars and other vehicles, and furniture. Business interests such as equipment and commercial properties are also included if the individual has a personal stake in a corporation.

Billionaires make up a small and very elite club of powerful individuals—both men and women—in the world. These people control enormous sums of money and the power and influence that comes with it.

Russian oligarchs steal their monies from Russian citizens and hide their gain in America, England, France: anywhere other than the places and eleven time zones that they live.

The Pandora Papers revealed the offshore shell game our plucky, Ayn Rand billionaire class (as well as some millionnaire celebrities we may LIKE) use to shield their money from taxes: the British Virgin Island, Belize, Samoa. American oligarchs own politicians, mostly in the Republican Party, but then there's Joe Manchin and Kristen Senema. The Democratic Leadership Council once embraced a "third way," ostensibly to siphon a lot of that American oligarch blood money to their election coffers, just like their Republican colleagues. It just meant they couldn't pay that much attention to African Americans, Hispanics, the LGBT, Women, and their concerns. Blue-collar workers, feeling rightly abandoned, fled to the former Grand Old Party, fed a steady forty-year diet of white grievance minstrelsy through AM talk radio, Fox Propaganda, and its myriad clones on sponsored networks and Internet cult personalities. After forty years of gaslighting, the minstrelsy has produced performance artists masquerading as politicians.

Gregg Abbott wants to bus immigrants at the border to Washington. He hasn't done anything since the deep freeze in Texas revealed their independent, libertarian ERCOT grid wasn't ready for the impact of climate change. Speaking of that, Texas climatologists are warning conditions are favoring a long drought this summer, summers that routinely hover around triple digits on the regular. Droughts mean fires, and evacuations like the ones we've seen in California are more likely. But no matter. Book banning. Bounties on women that exercise their rights to abortion (for now). Busing immigrants that I assume he'll have to "round up" (I doubt that, nor fighting drought fires is cheap, and he can't just stick the blue Texans with the bill). Book banning. Bounties. Critical Race Theory. Priorities.

A single individual making $100,000 per year will make a million in a decade. That same person would need 10,000 years to make their first billion dollars, or storage places for the monies in countries that they don't live in, and pliable politicians and banks to hide the theft.

Fossil fuels give American and Russian oligarchs leverage over the rest of the planet. Whether your grocers are Cosco, Harris Teeter, HEB, Kroger, Sam's Club, or Stop and Shop, the cost of food is directly proportional to the price of gas the truck driver has to pay at the pump to deliver it. The cost of gas is directly in your face at the pump. Students are paying legal loan sharks for the cost of education in America, more than in any other similar industrialized nation. Thus homeownership is falling among young Americans. Five-thirty-eight says they're leaving organized religion, and that might have a direct correlation to student loan payments that prevent them from moving out of their parent's house, settling down, and paying tithes and offerings as well as the aforementioned grievance minstrelsy. Churches without young people become museums. But the cost of living is leverage oligarchs execute over the populations of their countries. As many misgivings as I have for Elon Musk, we need SpaceX and other launch systems to get to the International Space Station or any other endeavor we pursue. Soyez isn't a space program: it's leverage.

Janus represented the middle ground between both concrete and abstract dualities such as life/death, beginning/end, youth/adulthood, rural/urban, war/peace, and barbarism/civilization.

Or, clean energy and extortion, existence and extinction, authoritarianism and democracy.