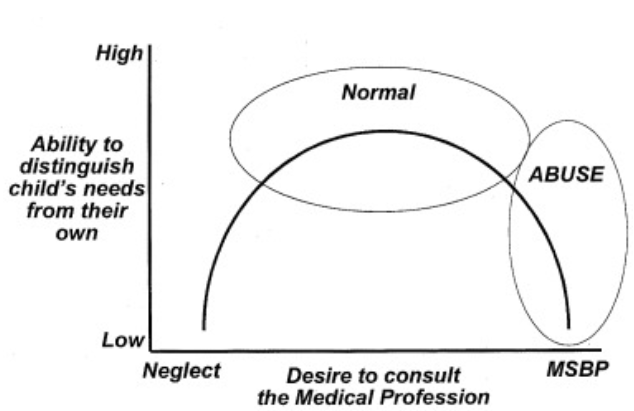 Tina Depuy (from her website: tee-nuh doo-pwee) wrote an analysis of the Republican Party when the House of Representatives was under John "weed head" Bohner in 2013:

Munchausen Syndrome by Proxy, now referred to as Factious Disorder by Proxy or FDbP, is where a parent or caretaker enjoys the attention of having a sick child. Hence, they exaggerate and sometimes induce their victim’s symptoms. Children are made to be sick; parents are given sympathy for their seeming stoicism. It’s adulation-seeking via child abuse.

In this case, the caretaker is Congress (specifically the Republican-controlled House). The thing they’re enjoying making unwell is, well, us: the country, our economy, postal services, meat inspections, air traffic control, infrastructure, law enforcement, military, credit rating, commerce, and every other part of a country [thought] of around the globe as a superpower.

This disorder can sometimes be traced to an early legit emergency, where the caregiver with FDbP first experiences the rush of admiration they’ll later crave. For the GOP, it’s probably September 11, 2001. It was on that day the then-leader of the Republican party (the same dude the GOP no longer acknowledges exists, they’ll even listen to Mitt Romney speak before uttering his name) finally got to do everything he wanted without question – all with an over (and brief) 80 percent approval rating. He pre-emptively invaded Iraq without paying for it, flattened wages, made the rich richer, and transformed higher education into a profit-driven industry. More importantly, he got Democrats to shut up while he pretended drunken-sailor-spending was compassionate conservatism.

The above article and its analysis by analog have aged incredibly well.

Unless you've been living under a rock, we now have the weakest Speaker of the House in the history of the republic who "gave away the store" to MAGA extremists and got his authority weakened. Is George Santos’s real name even George Santos? The only reason the pathological liar is tolerated is that it gives Kev a four-vote thin margin. If he removes him, it triggers a special election in a Blue State in a Democratic-leaning district (that somehow woke up from their drunken stupor and is pissed George is their Representative). If he were to survive the primary, the fictional Klingons have a proverb: "revenge is a dish that is best served cold." That would cut Kev down to three and resorting to public self-immolation. The constituents would send another Democrat to the House, increasing Hakeem Jeffries' numbers and steps toward Speaker in 2024. Under "Kev the Spinless," we can look forward to nothing but show trials, no credible laws proposed that could [possibly] pass the Senate, and going over the debt ceiling cliff in September, if Kev makes it that long.

Newton Gingrich started this mess. His philosophy was playing a zero-sum game, political terrorism, and nihilism. It was always a "Contract ON America," never WITH America, as it ignored a sizeable and growing part of the electorate that demographically, the republicans let themselves get caught flatfooted in the 21st Century, so: voter suppression as a Hail Mary. It was under Gingrich we started seeing the debt ceiling being used as a tool for hostage-taking (the entire government). He somehow (creepily) married his high school Geometry teacher, divorced her for his first mistress, then divorced the second wife (the previously-mentioned first mistress) for his second mistress (and now third wife) Calista WHILE trying to impeach Bill Clinton for the same thing!

Gingrich attempted a soft coup by Constitution: he aimed to impeach Bill Clinton and Al Gore and, by default, become President of the United States. He was both hypocritical and shameless, just like the Republican Party now. Zero-sum became the Tea Party under the first (and only) African American president, then the Orwellian "Freedom Caucus," which led inexorably to MAGA, having the same characteristics and number of letters as "Nazi." After midterm losses, he stepped down as Speaker in the face of full rebellion. Bob Livingston challenged him, then had the same "strayed from his marriage" issues as Gingrich and Clinton. That led to wrestling coach pedophile Dennis "the groomer" Hastert before Nancy Pelosi's first run. After that, John Boehner (ran out by the Tea Party), Paul Ryan (Ibid), and Nancy Pelosi for her last go-around, followed by a slimy, whimpering, limp surfer tan in a suit. Newt posing now as a wisened, sage political philosopher, is gaslighting from a windbag.

Do soft coups then become dry run practice coups like storming the Michigan Capitol under Gretchen Whitmore's first term as governor? Her attempted kidnapping and threats to her administration flukes? I guess Charlottesville, August 11 - 12, 2017, and The Insurrection of January 6, 2021, were all Antifa (antifascists) dressed as conservatives and bringing with them the Grand Pooh-Bah of the Loyal Order of Water Buffalos?

"The Republican Party is the party for normal Americans." Newt Gingrich.