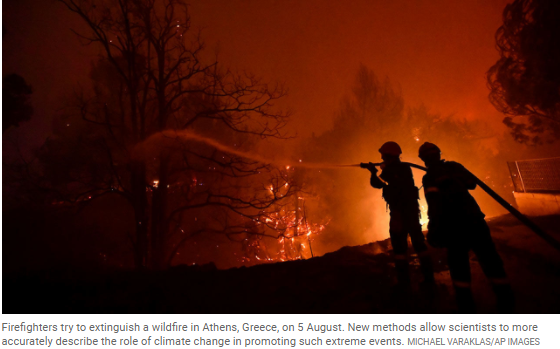 The hundreds of climate experts who compiled the mammoth new climate report released today by the U.N. Intergovernmental Panel on Climate Change (IPCC) had to work under unprecedented pandemic conditions. At vast meetings forced online, scientists wrestled with how to convey the extent of the global crisis and the urgent need to act. It was uncanny to see “the echoes of one crisis in another,” says Claudia Tebaldi, a climate scientist at Pacific Northwest National Laboratory and one of the authors of the report.

The report paints an alarming picture but emphasizes there is still time for swift action to mitigate the worst of the projected impacts of climate change. Current average warming is now estimated at 1.1°C compared to preindustrial records, a revision based on improved methods and data that adds 0.1°C to previous estimates. Under every emissions scenario explored by the report, average warming of 1.5°C—a major target of the Paris climate accord—will very likely be reached within the next 20 years.</em>

That timetable “underscores a sense of urgency for immediate and decisive action by every country, especially the major economies,” says Jane Lubchenco, deputy director for climate and the environment at the White House ​Office of Science and Technology Policy. “This is a critical decade for keeping the 1.5°C targets within reach.” And the projections mean countries should come to the United Nations Climate Change Conference, scheduled for November, with the most “aggressive, ambitious” targets possible, she says.