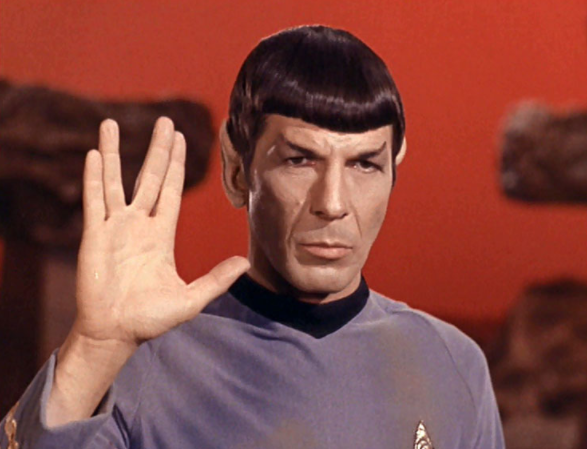 I've been finishing up the semester. I passed my preliminary exam. Now I'm working on refining my research question for my dissertation proposal, due late spring. I usually take a break from blogging around the holidays, and as my Dean put it, dissertations proposals are "a bear." So don't be surprised if I take a blog break for LONG stretches.

o'thia
Literally defined as "reality-truth" in Vulcan religion/philosophy, methods of emotional self-control, and teachings of pacifism. The term o'thia is also known simply as logic. Note: there is an error on the wiki - cthia, versus o'thia. See TOS novel: Spock's World, by Diane Duane. See beta wiki: https://memory-beta.fandom.com/wiki/Vulcan_language

As I type this, the FDA meeting on the Pfizer version of the coronavirus vaccine has concluded. They have taken the first steps towards approving the vaccine for distribution in America. The first woman in the world to receive it was a 90-year-old grandmother in Bristol. As she gave her arm and consent, many even in the UK expressed misplaced skepticism, expressing their version of European "anti-vax" sentiments. African Americans are still feeling the sting of the Tuskegee Experiment, decades later, and don't trust anything the current administration might have produced after waves of destructive behavior, destroying what was marginal "norms," but the pandemic has shown and is showing, we were not "normal," and we still aren't. The majority of WASP-C (White, Anglo Saxon Protestant Cisgender) countries are scarfing up vaccine supplies because they have the WEALTH to do so. We are still behaving carnally, like warring tribes over the next hill. The pandemic has revealed our world is imbalanced by racism and income inequality. A lot of the epidemics and pandemics stem from people trying their best to survive under circumstances they did not design for themselves. You can't complain about anyone eating a bat any more than you can about someone eating chitterlings and high-salt hog products when the scraps were literally all African Americans had to eat. See Umar Haque's article: "How Covid Proves the World is Even More Racist Than You Think." Start getting used to the term "vaccine nationalism." It's short-sighted: you can't do any international travel for business, or pleasure if developing countries - where we get a lot of precious metals - are still in lockdown.

Star Trek is modern mythology, born during the turbulent 1960s when there were the struggle for civil rights, women's rights, LGBT rights (Stonewall), civil unrest, assassinations, and the Cold War with the Soviet Union, "duck-and-cover" drills being as part of the school curriculum as masks are now. Gene Roddenberry envisioned a world in the far future, with fantastic technologies and cooperation among humanity that from September 8, 1966, to June 3, 1969, he obviously hadn't see demonstrated. In many ways, we're trying to "live up" to the optimistic (some would say Pollyannaish) vision today.

Star Trek inspired many P.E.E.R.s (People Excluded due to Ethnicity and Race, see David Asai, 2020 here, and here) into STEM, Dr. Ronald E. McNair, for example, and myself.

Spock particularly inspired me. He wasn't just Vulcan: he was biracial, not just of two cultures, but two worlds. From the canon, he seemed to experience xenophobia and insults from other "pure" Vulcans, as well as snarky humans like Dr. Leonard McCoy. Seeing myself in the outsider, "the other" in Science Officer Spock wasn't even a little stretch. Empathy for his fellow Vulcan's and some human's racism during the turbulent 1960s was easy.

We are a country in the aftermath of being gaslighted by a man his clinical psychologist niece says is so delusional, he can gaslight himself. We are a country in the aftermath of four-hundred years of gaslighting between "superior" and "inferior." "Reality-truth" is anathema to him and his cult following, primed by forty-years of AM talk radio and four-hundred years of generational brainwashing. The Fairness Doctrine wasn't repealed by Reagan, but it was abandoned in 1987 during his administration's lame-duck years. It affected radio broadcast licenses, so you can say this probably led to Rush Limbaugh and right-wing talk radio. Fox News is television, thus unrestrained by whether we had a fairness doctrine when they arrived in 1996 or not. The Texas AG and seventeen other AG's - all WASP-C males (White, Anglo Saxon Protestant-Cisgender) have filed a frivolous lawsuit to overturn the 2020 election results because the BIPOC (Black, Indigenous People Of Color, and P.E.E.R.s among them) have no votes that they deem credible unless they vote for republicans.

[Chief Justice Roger B.] Taney -- a staunch supporter of slavery and intent on protecting southerners from northern aggression -- wrote in the Court's majority opinion that, because Scott was black, he was not a citizen and therefore had no right to sue. The framers of the Constitution, he wrote, believed that blacks "had no rights which the white man was bound to respect; and that the negro might justly and lawfully be reduced to slavery for his benefit. He was bought and sold and treated as an ordinary article of merchandise and traffic, whenever profit could be made by it." PBS - Dred Scott case: the Supreme Court decision, 1857

Dr. Mary Trump is the author of "Too Much, and Never Enough: How My Family Created the World's Most Dangerous Man." She's apparently working on a follow-up book on the country's collective trauma due to her uncle's incompetence, and more likely, his many undiagnosed mental disorders. Also, as I listened to her View interview, she wants to talk about how we as a nation - not the BIPOC, or P.E.E.R.s - have collectively ignored our past and never reckoned with the slaughter of Native First Nation Peoples, the kidnap, rape, and slaughter-at-will of the African Diaspora, to the point the current dwindling majority can't see me any more than Taney did my ancestor, Dred Scott: we have no rights they are bound to respect, and our vote is by definition "fraudulent," unless we vote for them as "masters."

We might want a steady diet of o'thia if we want to survive as a species.

"Wakanda will no longer watch from the shadows. We can not. We must not. We will work to be an example of how we, as brothers and sisters on this earth, should treat each other. Now, more than ever, the illusions of division threaten our very existence. We all know the truth: more connects us than separates us. But in times of crisis, the wise build bridges, while the foolish build barriers. We must find a way to look after one another as if we were one single tribe." Chadwick Boseman as King T'Challa in the movie Black Panther, Rest In Power.