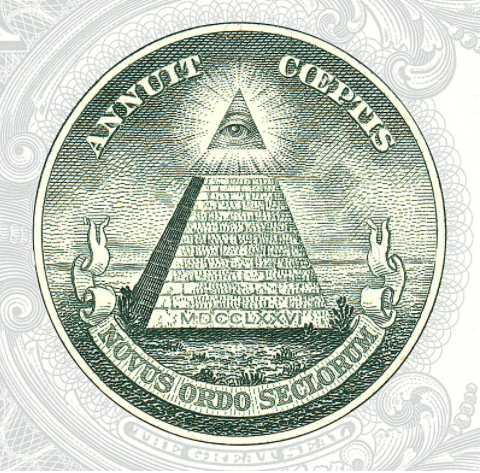 The Eye of Providence, Wikipedia. Not a conspiracy theorist, but greed, not mutual survival by cooperation, is how we got where we are.

Note: Because certain states are tied umbilically to coal, fossil fuels, and natural gas, this is a quandary. The same industry that's known about this problem since 1979 (my senior year in high school) hired the same law firms that obfuscated the risk of lung cancer to so many Americans, one of them, my father, whose death was from the accumulated damage to his lungs from a lifetime of smoking. Washington lobbyists are there to push an agenda for the companies they represent that have an influence on Capitol Hill lawmakers. They have a seat at the Paris Climate Accords because the goal of Capitalism is to maximize profits, sadly, at the sacrifice of the ground under our feet.

“Only when the last tree has been cut down, the last fish been caught, and the last stream poisoned, will we realize we cannot eat money.”

The majority of the planet’s fossil fuel reserves must stay in the ground if the world wants even half a chance—literally—at meeting its most ambitious climate targets.

A new study published yesterday in the journal Nature found that 60 percent of oil and natural gas, and a whopping 90 percent of coal, must remain unextracted and unused between now and 2050 in order for the world to have at least a 50 percent shot at limiting warming to 1.5 degrees Celsius.

These results are broadly consistent with the findings of numerous recent reports, from the United Nations, the International Energy Agency, and others, which have “all provided evidence that dramatic cuts in fossil fuel production are required immediately in order to move towards limiting global heating to 1.5 degrees,” said Dan Welsby, a researcher at University College London and lead author of the study, at a press conference announcing the results.

Under the Paris climate agreement, nations are working to keep global temperatures within 2 C of their preindustrial levels, and within 1.5 C if at all possible. Research suggests that the effects of climate change—melting ice, rising seas, more extreme weather, and so on—will be worse at 2 C than at 1.5 C, and worse still at higher temperatures. These targets are an attempt to limit the consequences of global warming as much as possible.

Yet studies increasingly suggest that the 1.5 C target is looming closer and closer.

The world has already warmed by more than a degree Celsius since the start of the industrial era, which began about 150 years ago. A landmark U.N. report on climate change, released last month by the Intergovernmental Panel on Climate Change, warned that the 1.5 C mark could be reached within two decades.

To have even a 50 percent chance of meeting the target, the U.N. report suggests, the world can emit only about 460 billion metric tons of additional carbon dioxide into the atmosphere. That’s another 12 years or so of emissions at the rate at which the world is currently going.

That means global carbon emissions need to fall sharply, and immediately, in order to meet the goal.