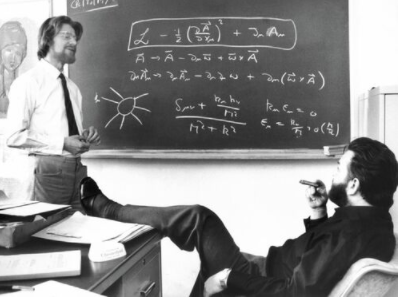 At CERN in 1973, John Bell (left), who was working there at the time, interacts with Martinus Veltman (right), who was then a professor at Utrecht University in the Netherlands. Since early 2020, COVID-19 has hindered physicists’ ability to travel and discuss physics in person. (Courtesy of CERN.)

An excerpt. The longer article piece is at the link following.

The COVID-19 pandemic has not only killed a large number of people—approximately 5.5 million worldwide at the time Physics Today went to press in mid-January—it has also disrupted life in a fundamental, nonperturbative manner, forcing large-scale changes in human behavior from without.

It was difficult at the beginning of 2020 to anticipate the great COVID-19 calamity awaiting the world. In February of that year, I was apparently among the first people to have urged the leadership of the American Physical Society to cancel its upcoming March Meeting in Denver, which APS finally did at the last moment after considerable hesitancy.

The logistics of canceling a meeting of 10 000 people right before the event are not trivial. But given the crowd density in APS March Meetings, it is reasonable to assume that the 2020 event would have led to a few thousand COVID-19 cases just among the physicist attendees. Overall, it may have led to many tens of thousands, perhaps even hundreds of thousands, of cases, if not more. That estimate is based on research related to the now-infamous Boston Biogen superspreader conference in late February 2020. Within a month, roughly 100 people in Massachusetts who either went to the conference or were a household contact of someone who went tested positive. The genetic-code-based investigation estimated that the event led to 300 000 COVID-19 cases worldwide by the beginning of the following November. APS made the right call in canceling the meeting.