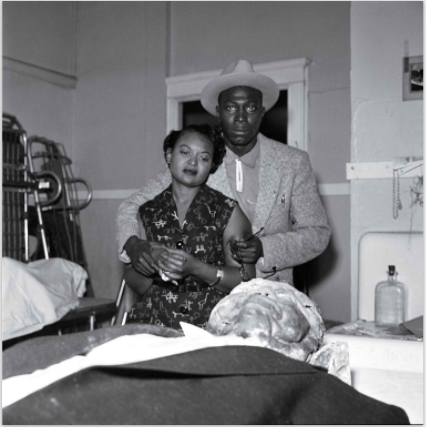 100 photos, Time: In August 1955, Emmett Till, a black teenager from Chicago, was visiting relatives in Mississippi when he stopped at Bryant’s Grocery and Meat Market. There he encountered Carolyn Bryant, a white woman. Whether Till really flirted with Bryant or whistled at her isn’t known. But what happened four days later is. Bryant’s husband Roy and his half-brother, J.W. Milam, seized the 14-year-old from his great-uncle’s house. The pair then beat Till, shot him, and strung barbed wire and a 75-pound metal fan around his neck, and dumped the lifeless body in the Tallahatchie River. A white jury quickly acquitted the men, with one juror saying it had taken so long only because they had to break to drink some pop. When Till’s mother Mamie came to identify her son, she told the funeral director, “Let the people see what I’ve seen.” She brought him home to Chicago and insisted on an open casket. Tens of thousands filed past Till’s remains, but it was the publication of the searing funeral image in Jet, with a stoic Mamie gazing at her murdered child’s ravaged body, that forced the world to reckon with the brutality of American racism. For almost a century, African Americans were lynched with regularity and impunity. Now, thanks to a mother’s determination to expose the barbarousness of the crime, the public could no longer pretend to ignore what they couldn’t see.

I am a child of "forced bussing," emphasized by the dominant culture of North Carolina in 1971, when 1954's Supreme Court Brown vs. Board of Education Decision, and "all deliberate speed" reached my municipality. I remember being nine years old, riding on buses at zero-dark-thirty in the morning to Rural Hall Elementary for the fourth grade, a limited experiment in federally-mandated diversity. I traveled to was in what was then, the rich, white suburbs. Every time my friends and I got off buses, we were miles from our homes.

We generally stayed in clicks: black youths on one side of the cafeteria, white youths on the other. In the evenings, I remember watching local and national news where high school students brought chains, bats, and knives. I recall waiting for our powder keg to explode.

Then, we played a game of football during recess. I don't know what "did it" for the girls, but boys covered in sweat, mud, and scrapes develop bonds that are hard to ignore. Thankfully, the powder keg never went off.

From Rural Hall, we were bussed back to East Winston-Salem at Fairview Elementary for fifth, and sixth grade. On to Mineral Springs Middle School for seventh, and eighth grade. Atkins, Carver, Hanes, and Paisley - traditionally, African American High Schools that reliably fed HBCUs - were "demoted" to ninth/tenth grade high schools, so that every student in the city would have the "benefit" of diplomas from the traditionally white high schools of North, East, Mount Tabor, and West.

The good news: most of the fourth graders that aged through this forced diversity got used to seeing people other than themselves. Star Trek was in syndication, and we were inspired by the vision of a future that at least our descendants would have their acts together, and learn like we did to live together post-warp drive, or football.

The not-so-good news: There were quite a few interracial couples, which I had never seen before. Quite a few "Christian" Academies sprung up to sidestep what their parents saw as ungodly miscegenation. I haven't kept contact with my former classmates from Rural Hall Elementary, Mineral Springs Middle School, Atkins High School, and North Forsyth High School. I can't help but imagine that many of them on the other side of the cafeteria before our mud-soaked football games have returned to the other side, donned red hats, and QAnon paraphernalia.

The times they want to return to wasn't so much the president named Eisenhower versus Obama; white picket fences in Levittown's, or affordable healthcare: "great again" is the ability to reign terror, and murder on an entire community - black, brown, LGBT, women, with absolute impunity. They made that QUITE clear on January 6, 2021.

Every significant group that has had knees on their necks, oppressed by the dominant group since Plymouth Rock took inspiration from the efforts that started post-1865, to this present political darkness. It will continue until E Pluribus Unum isn't just a quaint Latin phrase. We cannot be a democratic republic, AND a nihilistic, fascist dictatorship.

Their "great again" wish is that Mother Till hadn't opened that casket.

We are NOT going back! Black lives, and democracy, matter.