The world of Brandon M. Easton's Arcana Studios graphic novel Shadowlaw is set in the future, but the writer found himself inspired mainly by the past — and a lot from his childhood. 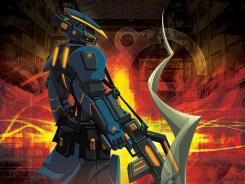 Out now in comic shops, online bookstores and digitally at Comixology, Shadowlaw melds aspects of sci-fi, action-adventure, religion and Japanese mecha (where pilots drive large robotic machines) in crafting a soldier's journey of betrayal and discovery.

Oh, yeah — there are vampires, too.

The graphic novel, which features art by Scott Kester, Ryo Kawakami and Dawnson Chen, is set in the year 2353, when the Catholic Church is the main global governing force and has an army of mech warriors. Vampires have similar weaponry, and the two forces have long battled for supremacy.

Rictor Caesaro, a soldier for the Earth Alliance of America, watches in horror as his superior guns down innocents in a riot at a ration distribution center, and is arrested and branded a traitor. The supreme chancellor, who became Rictor's foster father after his mother was killed in front of him, is in his corner, though, and because of his service, Rictor's death sentence is commuted and he's sent off to a prison in what was formerly the Okefenokee Swamp.

However, he finds allies in his new environment and begins to learn that the truths and beliefs he has kept for years are not what they were cracked up to be, but also runs into some seriously nasty and evil vamps a far blood-curdling cry from what you'd see on True Blood.

"I once joked that I put vampires into my story just so I could find ways of killing them," Easton says. "I wanted to get away from the romantic Southern gothic vision of vampires that Anne Rice had made popular over the last 30 years. The last thing I wanted for my creatures were for them to be wearing ascots and lace."

He's not a fan at all of vampire fiction, but he did grow up in Baltimore reading classic sci-fi literature and watching Star Wars, Alien, Superman, Logan's Run and other movies "like almost every kid born in the 1970s."

Easton also still finds influence in "the zeitgeist of 1980s afternoon-adventure animation geared toward teen boys" that was a part of his pop-culture diet, from Transformers, G.I. Joe and Robotech to Voltron, Masters of the Universe and M.A.S.K.

"I was very much inspired by the complexity of animation and storytelling," says Easton, a writer for Cartoon Network's ThunderCats animated series. "Although these series were created with the mandate of selling toys, the writers managed to carve out some very interesting stories in imaginative ways."

The original concept for Shadowlaw came from one place, though: watching Blade Runnertime after time and thinking about what if vampires existed in that future world. Easton wrote the first script treatment for it when he was at Ithaca College in 1996, but found it derivative of many of the things he had enjoyed over the years.

"I was in my early 20s and hadn't learned how to properly incorporate my conceptual influences with my original ideas," Easton says.

He spent years trying to break into Marvel Comics and rival DC Comics with no success, but was hired for Dreamwave Productions' original series Arkanium in 2002, where he worked with animators and illustrators and learned from mistakes.

Easton revisited Shadowlaw a couple of years later, and added aspects such as mecha to his original idea. Kester listened to what he wanted to include, and designed the vampire mechs. "He successfully incorporated all my inspirations into a cohesive visual style," Easton says.

He credits his own Catholic upbringing for infusing him with a strong work ethic, and Easton worked several elements of religion into Shadowlaw, such as Rictor's unflappable faith in his father figure and keeping of his rosary, as well as holy men's unyielding power in this dystopian world.

"Obviously, no one is perfect, but I do believe that the Catholic Church has many good things within it that get justifiably overshadowed by the child-abuse scandals," he says. "My faith is not what it used to be, but I still believe in many things I was taught.

"As a story device, faith is something that has been used by corrupt leaders for thousands of years and serves to be an excellent motivation for a flawed hero."

Easton is currently working on a few upcoming graphic novels, including a teen superhero adventure called Miles Away that he's co-writing with Star Trek: Enterprise star Anthony Montgomery; a steampunk reimagining of the Robin Hood legend with a female lead for the fledgling Lion Forge Entertainment; and Dominion's Light, a project illustrated by Jeff Stokely that Easton describes as "a sci-fi, sword-and-sorcery, Final Fantasy-style blockbuster mashup."

He also hosts the Writing for Rookies podcast, which specializes in advice for sci-fi and comic scribes. Easton, who is appearing at WonderCon in Anaheim, Calif., March 16-18, tells aspiring talent to pick the brains of established writers but also scour the Internet for nuggets of information.

"I found new ways of getting Hollywood studios and production companies interested in my work," Easton says. "I haven't gotten a million-dollar deal yet, but I understand the mechanisms for getting executives to realize I exist."