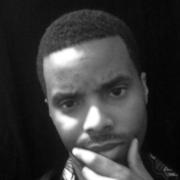 'Weben Em Ehker' which loosely translates into the English language as Rise In Excellence. My name is DjaDja N Medjay and I am an Afro-Futuristic Author. A native New-Yorker for over 35 years. My life-story is not so simple... Why did I start to write Science Fiction? For as long as I can recall, I have always had an interest in the Science Fiction Genre, having been thoroughly exposed to Classic (Blade Runner) and 'B' (Galaxina) Sci-Fi films by my grandfather. Many of these films along with the craze of comics shaped my reality as a young child. However, there was yet to be any great impact in Science Fiction films by a person of 'Afrikan' descent for years to come. Possessing a natural inclination to the inner workings of life, I embarked on studying metaphysics and spiritual concepts, which lead me to be a practitioner of Shiatsu (Acupressure) and Chi-Kung (Internal Breathing). My studies lead me back to the essence of where these arts originated from, which was Kemet (Kemet meaning the Land of the Blacks - known as Egypt), although Kemet was born from previous cultures of the interior of Afrika. Then the strongest impact that could be made happened, and launched my journey in writing...reading the works of Octavia Butler. Octavia Butler ​wrote some of the most powerful novels in Science Fiction to date, one of the most well-known being Kindred. So I began to write...and my first novel was born Renpet. ﻿Eventually I came upon the Afro-Futuristic Movement after a booksigning in Philly. Ever since that day, I became an Afro-Futurist.​ I began seeing the strong impact made by the ancestors in my culture on the Science Fiction world, noticing the key difference in expression. That key difference was that modern Science and Science Fiction is based on proving that the unknown can be tamed from an external application of science and machinery. While on the other side of the spectrum, Internal Science (as I like to call it) is based on the fact that the unknown is our birthplace and its energy utilized through internal harmonization and synergistic machinery. It is from this aspect that I write my novels. Rise in excellence!!! It is the most guaranteed constant of the cosmos!!!​ Ashe'