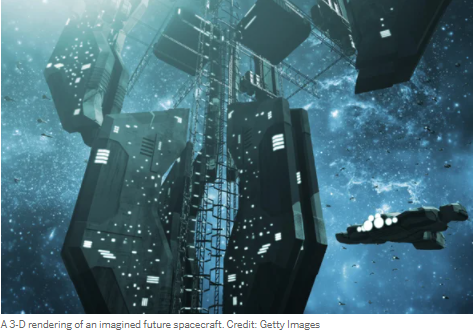 China is investigating how to build ultra-large spacecraft that are up to 0.6 miles (1 kilometer) long. But how feasible is the idea, and what would be the use of such a massive spacecraft?

The project is part of a wider call for research proposals from the National Natural Science Foundation of China, a funding agency managed by the country’s Ministry of Science and Technology. A research outline posted on the foundation’s website described such enormous spaceships as “major strategic aerospace equipment for the future use of space resources, exploration of the mysteries of the universe, and long-term living in orbit.”

The foundation wants scientists to conduct research into new, lightweight design methods that could limit the amount of construction material that has to be lofted into orbit, and new techniques for safely assembling such massive structures in space. If funded, the feasibility study would run for five years and have a budget of 15 million yuan ($2.3 million).

The project might sound like science fiction, but former NASA chief technologist Mason Peck said the idea isn’t entirely off the wall, and the challenge is more a question of engineering than fundamental science.

“I think it’s entirely feasible,” Peck, now a professor of aerospace engineering at Cornell University, told Live Science. “I would describe the problems here not as insurmountable impediments, but rather problems of scale.”

By far the biggest challenge would be the price tag, noted Peck, due to the huge cost of launching objects and materials into space. The International Space Station (ISS), which is only 361 feet (110 meters) wide at its widest point according to NASA, cost roughly $100 billion to build, Peck said, so constructing something 10 times larger would strain even the most generous national space budget.